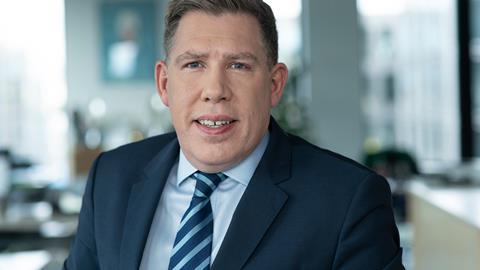 Big interview: Carlsberg Marston’s boss Paul Davies on why he’s not giving up on beer

The boss of Carlsberg and Marston’s JV is feeling positive as San Miguel soars, its core pilsner brand recovers and plastic gets the chop. What’s next?

Paul Davies is irrepressibly upbeat, in spite of the state of the world. As CEO of the newly formed Carlsberg Marston’s Brewing Company, he arguably has good reason. The past year has seen the once-ailing brewer transformed into a top player with a massive portfolio, reducing its reliance on one of the UK’s highest-grossing lagers.

The £780m merger of Carlsberg’s brewing arm with that of fellow supplier Marston’s – a JV that Marston’s owns a 40% stake in – was widely heralded as a win for both businesses by investors. The combined CMBC has a portfolio that spans everything from posh lager to real ale, and the potential for greater leverage when negotiating with retailers. It’s a solid, consolidatory play in a time of uncertainty.

Despite the obvious challenges of the pandemic and “the fact that during this time just over half our business was effectively closed overnight”, the integration of the two is going surprisingly well, says Davies.

Granted, it hasn’t all been smooth sailing for the CEO, who took the helm of the business upon completion of the deal in November, replacing former Carlsberg UK CEO Tomasz Blawat. Most notably, the pressures of the pandemic forced it to reduce headcount. “We unfortunately had to make some redundancies during this period,” says Davies. “We’re not immune to the financial challenges that the pub industry is facing.”

But the omens for the business as a whole are good. As at-home booze consumption surged, its brands punched above their weight on the supermarket shelves. In particular, posh Spanish lager San Miguel, which grew retail value by 68.2% to £273.2m to become the fifth bestselling brand in the supermarkets [Nielsen 52 w/e 30 January 2021].

For Davies, a Carlsberg veteran of 14 years, seeing San Miguel ascend above the likes of Heineken, Peroni and Corona in the off-trade is particularly vindicating. Because he was pivotal in bringing the lager to the UK in the first place.

“I was the first guy to speak with (the brand’s Spanish owner) Mahou San Miguel,” he says. “At the time we thought world beer would be a huge trend that was going to grow.”

That’s putting it lightly – the fastest-growing beer brands in the UK are nearly all world lagers. But what about Carlsberg’s eponymous core brand? The brew, once synonymous with football and heavy discounting, had a rough ride through the latter half of the past decade. It was ditched by Tesco in 2015 and struggled to find an identity and compete against trendier and more premium insurgents over the years that followed.

This culminated in a massive, sustainability-focused rebrand with a completely reformulated beer in 2019. Key to which was the addition of eco-friendly ‘snap packs’ that replaced plastic rings. The snap packs hold the cans together with a specially developed glue, meaning they can be pulled apart.

“I would argue it’s one of the biggest packaging sustainability projects in fmcg in the UK,” says Davies. “We’re continuing to roll that packaging solution out across multiple brands and consumers are really reacting very well to the technology and are learning how to use it.”

He credits this focus on innovation, alongside its relentless sustainability messaging, with Carlsberg’s return to growth in retail. Granted, you’d be hard pressed to find a beer brand that hasn’t grown in the supermarkets in the past year, as consumption has shifted into the home environment. Danish Pilsner was among 19 beer brands in the top 20 to rack up double-digit gains last year. Over a more recent data period, it outpaced many rivals with value growth of 73.5% in the multiple grocers alone [Nielsen 52 w/e 27 March 2021] – suggesting it’s doing something right.

Another Covid success story is the formerly flagging premium bottled ales category, which has been revitalised in the off-trade. Thanks to the merger, Carlsberg is now a significant stakeholder – having added the likes of Hobgoblin, Shipyard and of course Marston’s own branded ales to its ranks.

Not everything has worked in retail, though. The Carlsberg brand’s foray into non-alcoholic beers is a case in point. Carlsberg Nordic was quietly pulled earlier this year after it failed to make a dent – despite the stellar growth seen in the wider low & no market.

Davies suggests the concept of ‘Nordic’ perhaps wasn’t clear enough. “There was an added layer of complexity in communication for me around Nordic – a ‘0.0% beer’ style would have been simpler”. Still, he says CMBC is “very bullish” about alcohol-free beer. “You will see more from us in this space.”

Davies’ attention is now firmly fixed on the on-trade as the UK’s pubs and bars start opening their doors once again. “I think there is still a thriving opportunity,” he says.

In fact, the scene is set for hospitality to do more business than ever, as Covid has forced some savvy improvements. “Many of our customers in the on-trade did receive grants and what I was impressed with is that most of the customers we visited have invested that money not in short-term financial support but actually into something that’s going to create growth in the future.

“So rather than putting in a simple marquee, for instance, they’ve built something much more structural, like a proper outdoor bar.”

What else does the future hold? Davies stresses CMBC will not be following in the footsteps of its rivals Budweiser Brewing Group and Molson Coors, both of which are expanding into other categories such as hard seltzer, spirits and RTDs.

Instead, Davies says he is more interested in expanding the beer category. For him, there are still “so many need states that haven’t yet been brought to the UK’s shelves, so many different styles and opportunities”.

Like wheat beer, for instance. He points to the Molson Coors-owned brand Blue Moon as a “great beer” that has been “in the market here for a long time”. But there are opportunities in its own portfolio too. “We see Erdinger performing extraordinarily well across all channels – it has more listings in the on-trade to come and off-trade is really exploding.”

In any case, he says: “There are value pools that haven’t even been thought about. I’m certainly not giving up on beer. My competitors can do that.”

Family: Married to Sarah, my long-suffering love, with two boys.

The best business advice I’ve ever been given: Keep your head in the clouds and your hands in the dirt. CEOs need to do that now – they need to be able to focus and understand operational detail. But if they’re not providing vision and thinking ahead then they will lose the company.

And the worst: Misguided advice about being absolutely single-minded and just driven by single KPIs. It doesn’t work like that.

The last great book I read: Shoe Dog by Nike founder Phil Knight. I have never read such a funny business book.

The last great album I listened to: I listen to Coldplay endlessly.

My death row meal: A really good ribeye steak with fries and just a simple side salad, then chocolate ice cream and a Hobgoblin Ruby.

If I could have dinner with one person: I would like to have lunch with Elon Musk.