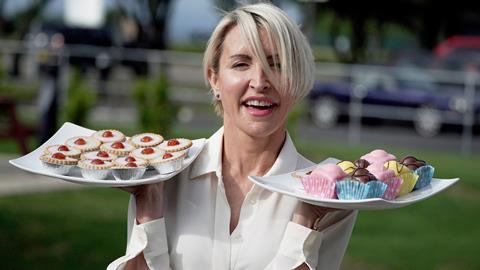 The Vision of V Bites: how Heather Mills is building a Silicon Valley for plant-based food - in Newcastle

When Heather Mills started out, vegans were seen as ‘smelly, hairy-armpit, boring people’. Now she’s building a Silicon Valley for plants – in Newcastle

Talking about “putting journalists in prison” is not the most auspicious start to an interview with the former wife of a Beatle, who has just won “the highest libel settlement in British legal history”.

Happily, that’s something Heather Mills wants to put behind her. Having received an undisclosed sum and apology from the News of the World’s former publisher News Group Newspapers over the summer, she wants to start “rebuilding and repairing all the damage they had done”.

Namely, that means shedding more light on her burgeoning vegan food business, VBites. Mills had previously kept her link to the business low-key “because I was fighting with Murdoch”, she says. “That’s why we never came out of the woodwork. But as soon as we put the journalists in prison we knew they weren’t going to come after us again.”

The self-confessed workaholic, who is either “always on or always off”, certainly has no shortage of ambition. Her plan is to create the “environmental equivalent” of Silicon Valley in her native northeast - dubbed ‘Plant-Based Valley’ - which was officially unveiled in September.

It’s a tough challenge. But when Mills sets her mind to something, she seems to make it happen. In the space of the past two decades, she has rarely been out of the public eye - rubbing shoulders with world leaders and gaining recognition as a model, downhill skier, activist and charity campaigner, while also battling the controversial headlines about Lady McCartney.

Her interest in veganism predates her time in the public eye, though. It all began after the devastating collision with a police motorbike that led to the loss of her left leg in 1993. An ongoing infection meant doctors had to “keep chopping away” at her limb over the course of five months, until a friend suggested she adopt a vegan diet. “I was like, what the hell is vegan?” she recalls. “And I basically got dragged out by her, because they couldn’t heal me in the hospital.”

Mills checked into a Florida-based alternative medicine centre - the Hippocrates Health Institute - which advocated a raw vegan diet. It was this regime, she says, that ultimately helped her wounds to heal. “But as I got healthier, I felt all I was doing was eating raw food,” she says. “I didn’t feel part of society, I was always freezing, and I missed the taste of meat, fish and dairy.” Faced with vegan food fatigue, she started making her own meat and dairy alternatives.

What followed were several years of “behind the scenes” work in vegan food development for meat companies. At a time when veganism was still a niche concept, that was tricky. Mills took a degree in nutrition and food science but says nutritionists “didn’t understand vegan meat” at the time. The real learning came from developing plant-based food on her own, she says.

Mills’s main inspiration for her recipes came from people looking to reduce their meat intake, rather than committed vegans. She wanted to avoid people saying: “I’d go vegan but I’d miss my doner kebab”. By 2009, she had acquired the Redwood Wholefood Company - which eventually became VBites - and operated out of a “tiny” factory in Corby, Northamptonshire. She went on to open the VBites café in Hove, West Sussex in the same year, which was loss-making but allowed her to finesse her recipes. “The whole goal was to feed the carnivore, never the vegan” and to change perceptions of vegans as “smelly, hairy-armpit, boring people”.

By the early 2010s the Corby plant was “doing well” and full to capacity. “Then we had a choice,” says Mills. “Go big or go bust.”

She has firmly decided to go big. By next year, Mills hopes to take the headcount of her businesses - VBites, and SME incubator business VBites Ventures - from 160 people to 400. That will be the start of the Plant-Based Valley vision (three factories based around Newcastle) coming to fruition.

Mills’s factories now represent more than 600,000 sq ft of manufacturing capacity. But the VBites branded range, available on its own site, Morrisons and Ocado, is only a small part of the operation. The company supplies products to myriad food manufacturers, retailers and food service operators, including Bakkavor, Birds Eye, Greene King’s pub chain, Papa John’s and Frankie & Benny’s. Mills is also increasingly pushing her factories as a manufacturing facility for other businesses.

“The biggest Achilles heel for anyone going into the vegan sector is scale,” she says, citing the difficulties plant-based brands such as Beyond Meat and Impossible Foods have faced in meeting the growing demand for their products.

Plant-Based Valley - which includes the former factories of Walkers Crisps at Peterlee, Coty/P&G in Newcastle and another plant in nearby Benton - is the solution, she claims. “We do all our R&D and speciality stuff at Corby, and once a company orders over a certain amount, we then scale it up.”

Not short of confidence, Mills is also advising a number of meat and dairy companies on how to go vegan. “We’re showing them how they can make money by growing oats to make into oat protein isolates, or growing mushrooms so we can do hydroponics, but most importantly algaes.”

Mills is particularly passionate about algae. It has the potential to end vegan food’s dependence on often expensive commodities such as soya and pea protein, she suggests. “We’ve created an algae protein isolate that will become the biggest ingredient going,” she claims. “It would stop climate change from meat and dairy manufacturing if everyone just moved to algaes.

Family: One daughter, Beatrice, 15, from her marriage to Paul McCartney

Potted CV: Moves to the former Yugoslavia to volunteer as an aid worker during the Balkan war in 1990. Loses leg in road traffic accident in 1993. Acquires VBites predecessor Redwood Wholefood Company in 2009, and opens VBites café in Hove. Officially opens Plant-Based Valley in 2019

Business mantra: Be prepared to live in a caravan and get to the precipice and be ready to fall over. I tell people “don’t own a business, always work for someone”. You can have a life and switch off.

Hobbies: Skiing, languages, playing the saxophone, spending time with my daughter and dinner with friends - I don’t cook any more.

What’s the main obstacle to success in business? Cashflow and risk-averse banks.

“What I want to do with my profits is set up little algae plants in all the countries we’ve destroyed through global warming,” she adds. “It can grow anywhere with tiny amounts of recyclable water.”

Mills eventually wants the VBites logo to become the trusted brand for all vegan foods. Businesses including Great Western Railway and Morrisons have already asked permission to use the brand, which she says will ultimately be licensed out. “More and more people will want to use the logo versus, say, the Vegan Society, as they don’t have the traceability we offer.” Mills also launched a vegan make-up range last month, called Be at One, which she thinks will be a hit in countries such as the UAE, as “most people don’t know there is pig in make-up”

As plant-based food is “now a movement not a trend”, Mills believes meat and dairy companies will need to adapt to stay in business over the next 10 years. They will need to “start replicating whatever they are doing” with plant-based alternatives, she predicts. “Otherwise they are out.” In 20 years, she argues, eating animal protein will be viewed as “like smoking” or even heroin.

It’s not just talk. Mills clearly believes in the potential of her business. She currently works from 4am to midnight, apart from “a few hours off in the morning and the evening” to spend with her daughter. “That’s what you have to do” at this point in her business, she says. “I don’t plan to be doing that forever. It’s about what are you prepared to risk and you will never become a big entrepreneur unless you are prepared to take that risk.”

“I’ll either be the most successful vegan entrepreneur in Europe or go completely bust.”