Heinz takes the cake with saucy snacks for 150th anniversary 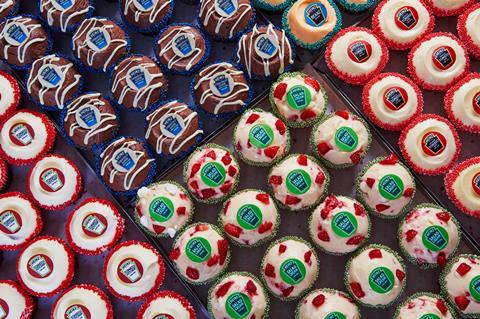 Have your cake and don’t eat it: Heinz’s ‘treats’, yesterday

Happy anniversary Heinz! The sauce and bean giant is marking its 150th year. And as it doesn’t count cake among its ‘57 varieties’, it has teamed up with The Hummingbird Bakery for a selection of special cupcakes that mark its most famous brands.

Alas, not content with merely adding a bit of food colouring to make each cake reflect each product, Hummingbird has taken the brave step of actually including said ingredients.

So we get a red velvet cake with ketchup, which ‘adds sweetness to the mix’. It’s a similar deal with the tomato soup cake, except its frosting contains a hint of basil. Meanwhile the addition of beans creates a ‘carrot cake-like sponge’. Most theoretically retch-inducing are the mayo and Salad Cream options, to which the respective additions of chocolate and strawberries seem optimistic at best.

If you’re jealous of the lucky Heinz employees who get to neck these at the company do, then don’t be: they’re available from all six branches of Hummingbird Bakery now! Do let us know what you think.