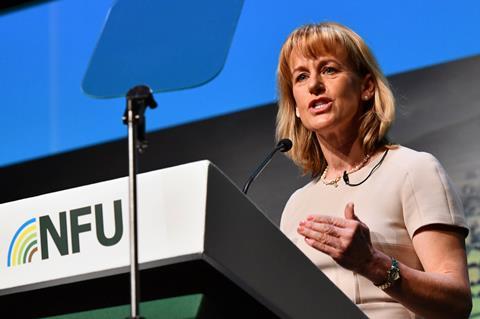 NFU president Minette Batters has described suggestions the UK would accept imports from countries with lower food standards as “the work of the insane”.

Speaking at the opening of the NFU Conference in Birmingham today (25 February), Batters called for the setting up of a trade and standards commission to “oversee trade regulations regarding agriculture and food”.

After criticising the farming systems of countries the government is said to be pursuing trade deals with – such as the US and Japan – Batters said: “To sign up to a trade deal which results in opening our ports, shelves and fridges to food which would be illegal to produce here would not only be morally bankrupt, it would be the work of the insane.”

She instead called on the government to demonstrate “global leadership” and make UK farming standards the global “benchmark for climate-friendly farming” after Brexit.

Her comments come on the same day a report in in The Guardian warned the government faced friction in its talks with the EU, which is set to insist it does not import chlorinated chicken if it wants a trade deal.

Describing 2020 as the most significant year for British farming in living memory, Minette Batters also called on the government to scale up the Seasonal Agricultural Workers Scheme pilot.

“We need 70,000 seasonal workers in our horticultural sector,” she said. “A commitment to have a seasonal scheme for just 10,000 simply isn’t enough. We urge the government to increase it for 2021.”

Responding to repeated government calls for sectors to invest further in mechanising processes to alleviate the requirement for labour, she added: “Millions of pounds is being invested in automation and mechanisation, but there is no scaled-up automation around this year – or next – that can replace the workers we need.”

The NFU president also touched on the recent flooding in key agricultural areas of the UK, urging Defra to do more to prevent a repeat of the “devastation” seen in recent months.

Batters’ speech comes ahead of tomorrow’s speech at the conference by Eustice, in which he will describe farmers as being at the forefront of reversing environmental decline and tackling climate change.

“Now more than ever, efforts for the environment are absolutely critical, and no group has more power to reverse environmental decline than our farmers,” Eustice is expected to say.

“We can all agree that we want British farming to be sustainable in the truest sense of the word: an industry which is profitable, competitive and productive while feeding the nation and taking care of our landscapes too.”

Eustice will also outline the government’s post-Brexit farm payments scheme, which will see farmers paid for work that “enhances the environment”.