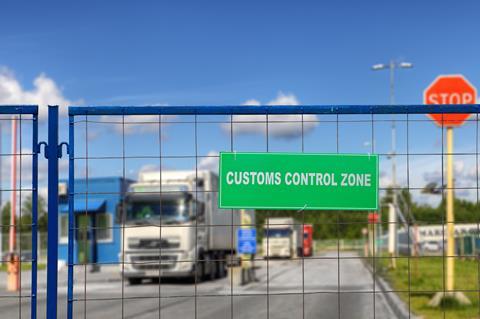 Supermarkets and suppliers face a showdown over the “biggest single Brexit risk to the food chain” – who will cover the extra costs of EU imports following Brexit.

New customs declarations for EU trade will cost British businesses up to £7bn a year, according to government estimates, and will apply regardless of a free trade agreement with the EU. Average tariffs of 20% on food and drink could also apply unless a zero-tariff deal is reached.

The party responsible for paying these costs, filing the paperwork, and taking on the financial risk of importing goods is determined by the ‘Incoterms’ set out in each commercial contract.

Most food arriving at UK supermarkets is currently ‘delivered duty paid’, or DDP, meaning the supplier is primarily responsible for the import process. However, alternative Incoterms can be specified to distribute the burden differently.

It is of little relevance while the UK is in the EU customs union due to the lack of costs and paperwork for European goods, but from next year, if a supplier has agreed to deliver goods to a supermarket at a set price, there are concerns they will be forced to carry all the additional cost.

This could have major impacts on cashflow and potentially restrict some companies’ ability to bring food into the UK. There are warnings it could even push some into bankruptcy.

“There’s a whole range of complications around who owns what in the process,” said Shane Brennan, CEO of the Cold Chain Federation.

“There are lots of places where these decisions haven’t yet been made and it is the biggest single Brexit risk to the food chain. There are a lot of nasty surprises coming if people aren’t on top of this.”

As part of no-deal Brexit planning last year, Sainsbury’s told suppliers they must continue delivering goods DDP and therefore bear the costs of all tariff and customs arrangements. Lidl also said it expected suppliers to pay EU import tariffs for goods delivered to its Irish business.

There are reportedly fewer discussions this time, with several suppliers confirming supermarkets have not contacted them about Incoterms in recent months.

“Suppliers are going to catch a huge cold if they’re not careful,” said Richard Bartlett, director at international trade advisors Export Unlocked, warning “Incoterms is as fundamental as any other issue caused by the UK leaving the EU”.

He advised suppliers to begin negotiations immediately with supermarkets, otherwise “they might find the bigger chains hold them to that [DPP] and say, ‘sorry it’s in the contract’”.

Ged Futter, director of the Retail Mind, insisted any import costs borne by suppliers would be fully passed onto retailers. “If the retailer refuses to accept that then I would imagine 90% of manufacturers will say ‘well in that case you’re not going to get it’”.

“The retailers can try and play hardball, but it always comes down to availability and actually, will they want to have empty shelves? Because that’s what will happen.”

He argued suppliers’ tight margins made it impossible for them to absorb further costs, whereas supermarkets could pass it on to customers. “If suppliers have a choice between breaking the contract and going bust, then what are they going to do?”

The process for passing on costs may differ depending on whether it is due to tariffs or customs, said David Sables, CEO of Sentinel Management Consultants, arguing tariffs are effectively a tax and therefore will be automatically passed on to the retailer. “Customs clearance on the other hand is an administrative burden and the importer will have to pay that. But that will be reflected in their costs.”

Adjusting costs, however, can come with its own negotiations, which may be trickier for some smaller suppliers.

“Given the vast majority of suppliers are small and medium sized businesses it’s going to be a pretty tough negotiation for some of them,” said Dominic Goudie, head of international trade at the FDF.

Some supermarkets’ insistence last year that suppliers cover the EU tariffs on imports into Ireland forced some manufacturers to reconsider their operations there, he added. “Some suppliers said it’s no longer viable for them as a business and they will just have to lose that trade.”