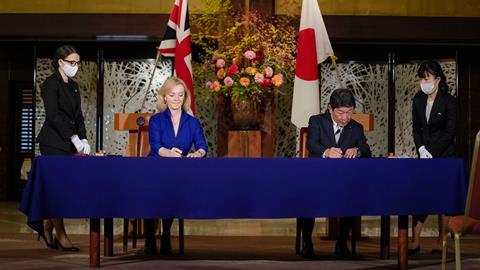 UK-Japan trade deal: what are we getting exactly?

Trade secretary Liz Truss was triumphant after signing the UK’s first major post-Brexit trade deal with Japan last week. “It used to be said that an independent UK would not be able to strike major trade deals, or they would take years to conclude,” she proclaimed. “But today, we proved the naysayers wrong with this groundbreaking, British-shaped deal… agreed in record time.”

Truss claims the deal will provide greater market access for British food and drink, enhance protections for British products, and improve rules of origin for manufacturers. But is it as “groundbreaking” as promised?

Cheese has frequently been the wheel on which these trade talks have seemingly turned. Enhanced market access was reportedly driving a wedge between the sides back in August. Truss marked the official signing ceremony last week by presenting a jar of stilton to Japan’s foreign minister Motegi Toshimitsu. But if cheese producers had high hopes of a sizeable export boost from this deal, they may be somewhat disappointed. Tokyo rejected the UK’s attempts to acquire extra quota on agricultural exports. Instead, for 10 out of 25 products that currently benefit from reduced tariffs under the EU-Japan deal, including cheese, tea mixes and wheat products, the UK will now be able to use any quota left over by the EU. For example, if the EU uses 20,000 tonnes of its 21,000-tonne quota for low-tariff cheese exports, the UK can use the remaining 1,000 tonnes. Other products, including butter, whey, and sugar, have lost all access to lower tariffs.

The positive news for British producers is that accessing the reduced tariffs, where they do apply, has become much easier under the new arrangement. Whereas EU businesses must apply for the lower tariff rate before their goods are shipped to Japan, the tariffs on UK products will be applied upon arrival. This could offer British products a competitive advantage in the eyes of some Japanese importers, though there will always be the risk products arrive to find the low tariff quota already filled.

“Nothing like this has ever really been done before,” says Tori Morgan, EU exit & international trade adviser at the NFU. She believes that, while the simplification is a positive step, uncertainty over how it will work in practice could overshadow some possible gains. “A lot of how it works may just have to come out in the wash,” she says.

But tariffs or no tariffs, a trade deal is unlikely to cause food and drink exports to boom overnight. Cultural differences with Japan will call for understanding and adaptation, while for products like cheese, further investment in marketing and education may first be required. “Having market access is one thing. Market presence is another altogether,” says John Giles, president of the Chartered Institute of Marketing for food, drink and agriculture.

Where the government got “slightly more than people assumed” was on rules of origin, explains Dominic Goudie, head of international trade at the FDF. The deal allows for EU ingredients in British manufactured goods to count as ‘British’. That clears the way for more products to benefit from the preferential tariff rates reserved for British products. Proving the ingredients’ origin has also been simplified, adds Goudie, which could have benefits. “Hopefully, Japanese buyers might just see that the rules of origin are slightly simpler when buying from the UK and that will provide a small competitive boost.”

Liz Truss insisted the UK-Japan deal “goes substantially further than the existing EU deal,” including on geographical protections. In addition to the continued protection of the six British products specified in the EU-Japan deal, including scotch whisky and West Country farmhouse cheddar, the UK is to look to extend protection to 70 other products in January.

Extra geographical protections are often added to new trade deals at later dates, so whether this is actually an improvement for the UK or simply a more detailed exposition of a typical trade deal feature is unclear. But it does suggest the government will use the EU as its benchmark as it continues on its Global Britain strategy. Is the UK’s Japan deal that different from the EU’s? Not really. But it at least seems to promise the clarity and continuity businesses asked for.