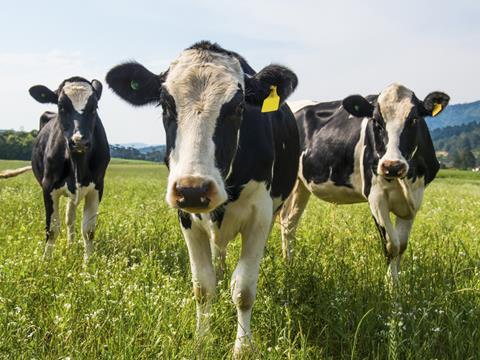 Dairy farmers have been short-changed to the tune of £200m since June, the NFU has claimed, with milk buyers failing to pass on improvements in global markets to milk suppliers.

After the turmoil of the past two years, commodity markets had now turned significantly, said NFU dairy board chairman Michael Oakes, with evidence showing market signals were on an upward trajectory and spot prices for milk now approaching 40ppl.

UK daily milk deliveries for the two weeks ending 24 September were on average 7.9% lower than the same period last year, according to AHDB Dairy, with the effects of farmers pulling back on production or leaving the sector altogether continuing to tighten supplies.

But Oakes said processors and retailers were “lagging behind in passing on the huge lifts in market prices to their suppliers”, with most non-aligned prices still at or below 20ppl, and the gap between UK farm prices and average dairy commodity prices (ranging from 25ppl to 30ppl) actually widening.

“Farmers have been patient, understanding the time lag that is part of dairy trade,” he said. “But that reason is starting to wear thin, as we need to start considering increased costs of winter housing and feeding. Our message is clear - until milk buyers start backing British dairy farmers and start paying fair, sustainable milk prices, volumes will not recover.”

A spokeswoman for Dairy UK said its members were “hopeful that the market will keep improving in the coming months, easing the pressure on all sides of the UK dairy industry”.

Oakes’ comments come as Rabobank warned the milk tap would be “slow to turn back on”, with its latest Dairy Quarterly report forecasting EU milk production to fall by 2% during the second half of 2016.

Müller - which was targeted by farmer protests earlier this summer over its lack of action on prices - this week announced an average milk price increase of 1.5ppl, taking its contract price to just under 21ppl and to 23ppl when retailer supplements are counted. This gives a total price rise of 2.5ppl for October and November.

However, agriculture director Lyndsay Chapman warned a sharp rise in farmgate prices as called for by farmers may not be forthcoming: “We must be competitive in comparison to other organisations who offer their farmers different levels of milk price returns, or choose to retain rather than pass on the extra supplements they are receiving from retailers.”