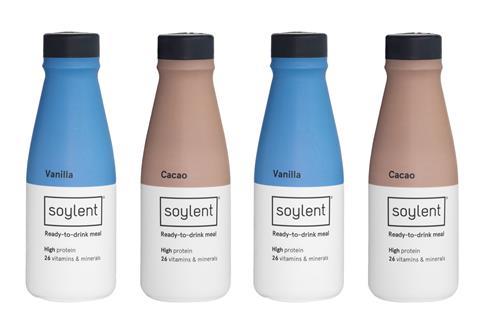 They are vegan, gluten- and nut-free and contain 20g plant protein

US meal replacement brand Soylent Nutrition has made its UK grocery debut in Sainsbury’s.

Two of its flavours – Cacao and Vanilla – have rolled out into 93 of the retailer’s stores, sitting alongside the likes of UK brand Huel and French meal replacement Feed.

The drinks are vegan, gluten-free, nut-free and contain 20g plant protein per bottle as well as 26 vitamins and minerals (rsp: £3.49/414ml).

Soylent said it expected to see “the same level of excitement from retailers in the UK” as it had with its “rapid roll out” in the US, adding that the Sainsbury’s partnership was “really exciting” as it supported the “retail focus” for Soylent moving into 2020.

“Although the [meal replacements] category is relatively new in the UK, early indications are extremely encouraging that it has a very promising future,” added Clark McIlroy, MD of the brand’s UK distributor Red Star.

The drinks will be sold Sainsbury’s on a trial basis for 4-6 months, after which Sainsbury’s will decide whether to keep them on board.

The brand is also currently sold in WH Smith and Amazon.