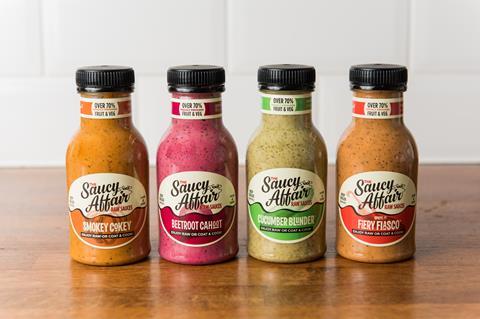 Fresh sauce startup The Saucy Affair is to disappear from chillers after temporarily halting production to focus on fundraising.

The brand will no longer be available in Sainsbury’s, its only grocery stockist, once its current supply sells through in coming weeks. Three variants – Beetroot Cahoot, Cucumber Blunder and Fiery Fiasco – are still available, but a fourth, Smokey Cokey, is already out of stock [Edge by Ascential w/e 20 May 2019].

The Saucy Affair founder and sole employee Tanya Robertson-Lambert had “made the decision to press the pause button on our supply into retail” she told The Grocer. It would allow her “to focus my attention on raising the funds to relaunch the brand”.

She is seeking finance for new-look packaging scheduled to roll out in January. “We’re in conversations regarding investment on several levels”, she said. The business was considering a joint venture or private investors “while also keeping the option of crowdfunding open”.

New funds would also be spent on “an experienced team to design and implement the marketing activation plan that this concept and brand deserves” Robertson-Lambert added.

She launched The Saucy Affair in early 2016, securing the Sainsbury’s listing last August. Her relationship with the grocer had been positive and “eye-opening” she said. “The past seven months enabled me to gain a deeper level of consumer insight, facing the challenges of launching not just a new product, but a new category of chilled convenience.”