The Collective to raise cash for Action Against Hunger 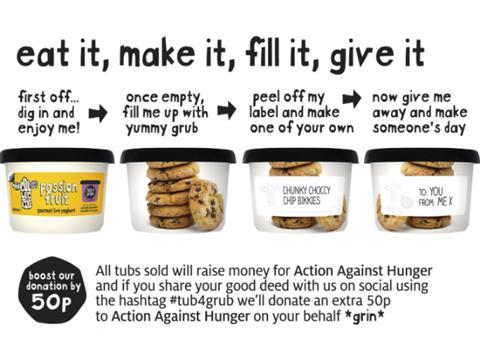 Yoghurt brand The Collective has teamed up with charity Action Against Hunger for a new initiative which aims to cut waste and raise money for the needy.

The brand is pledging to raise up to £20,000 for the charity through its Tub4Grub campaign which launches next week and runs until the start of February.

Three million of the brand’s 450g and 900g yoghurt tubs will bear a unique ‘peel back’ label that will reveal a new gifting label underneath. The new labelling technology was a first for a UK yoghurt brand, said Collective co-founder Amelia Harvey, and would enable consumers to re-use and personalise the tub, fill it with food and share with someone locally who is in need of a treat.

The Collective will donate a minimum of £10,000 to Action Against Hunger through sales of the tubs and will donate a further 50p to the charity every time someone passes on a tub and then shares their good deed at website www.tub4grub.com (which launches on 17 November), or using the hashtag #tub4grub on social media.

A host of chefs, including Anna Hansen of The Modern Pantry restaurant in London, have also offered their services to the campaign and will provide easy-to-make recipes for the Tub4Grub website as inspiration for food to gift on.

“We have received lots of lovely feedback from our consumers on how they like to re-use our tubs for all sorts of things from taking salads to work, freezing stocks and sauces and using them for their children’s play-doh,” said Harvey. “This campaign takes the re-use of our tub one step further and goes to the heart of what we’re all about as a business.”

The money raised for Action Against Hunger would help provide for up to 20,000 days’ worth of food for malnourished children across the world, Harvey added. The yoghurt brand previously worked with the charity last year, when it donated 5p per tub of its limited edition rhubarb, vanilla & lemongrass yoghurt.

“Tub4Grub is a great campaign that will encourage so many people in the UK to reach out and care for those on their doorstep who may be in need of a smile and a little bit of love,” said Action Against Hunger’s head of corporate partnerships Katherine Ross. “For us, it’s a significant donation that will help immensely in our bid to provide treatment for thousands of malnourished children in the countries we reach out to.”