Health-minded Brits turn their back on bacon 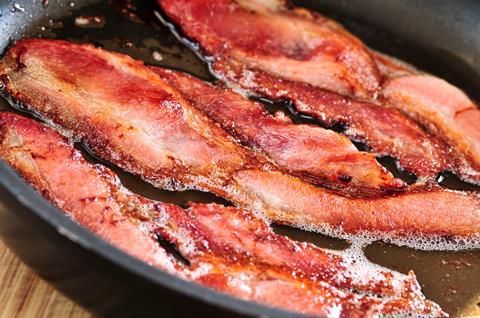 Brits are falling out of love with bacon, with health concerns and a slump in deals driving a £56.8m drop in the value of supermarket sales over the past year.

The slump was driven in part by a series of scientific reports on the health risks of processed meats, suggested Matt Southam, AHDB’s head of retail engagement. These included the 2015 study by the WHO’s International Agency for Research on Cancer, which made a direct link between consumption of processed meats and bowel cancer.

Sales were also hit by a drop in ­promotions across the meat category last year (down 3.5%), alongside “changes in breakfast habits and an increase in bacon consumption out of home”, he added.

Naked Bacon doesn’t contain nitrites - which were identified by the WHO as potentially cancer-causing compounds.

However, consumer perceptions could be set to change again after a new study, published this week, suggested the link between meat and cancer had been overstated.

Reducing meat intake brought few if any health benefits, according to a panel of researchers led by Dalhousie University and McMaster University in Canada. Diets lower in processed and red meat had “little or no effect on the risk for major cardiometabolic outcomes and cancer mortality and incidence”, they said.