Let’s have some perspective on the clean eating ‘backlash’ 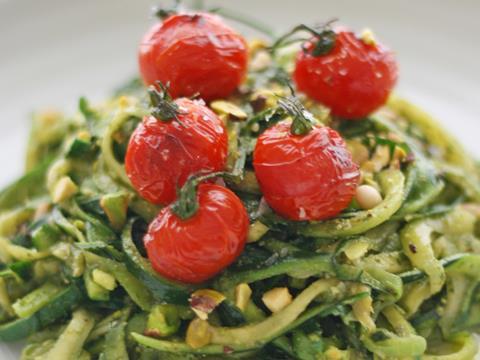 Every food trend has its inevitable backlash, and the one against clean eating – as typified by the rise of the Hemsleys, who’ve just launched their own series on Channel 4 – is currently gathering steam, with both The Mail and The Sun taking the glamourous sisters to task.

No more cooing over clever pizza crusts made from cauliflower that taste ‘almost as good as the real thing’ (er, they really don’t) or praising the virtues of bone broth – the trend that sold a thousand spiralisers is now being branded dangerous; its strict catechism of ‘no sugar, no gluten and no dairy’ a sure-fire recipe for an eating disorder.

The psychological minefield that is labelling certain foods “clean” and others (by implication) “dirty” is clearly no laughing matter – British Bake Off contestant Ruby Tandoh has written powerfully about how an obsession with ‘wellness’ and clean eating ended up compromising her own mental health. And while not yet officially recognised as an eating disorder, diagnoses of orthorexia – a pathological fixation with healthy eating – are said to be on the rise.

But, as with diets, balance is key. Yes, some of the concepts espoused by clean eating evangelists are preposterous (the Hemsley’s supposed penchant for ‘astrologically harvested’ eggs certainly doesn’t help their cause) but it’s equally absurd to suggest clean eating is inevitably harmful. Esther Walker hits the nail on the head when she says the extreme experiences of a few are not indicative of how most people approach dietary advice: “When hi-jacked by loonies, clean eating becomes something fascist and scary when, in fact, it’s harmless.”

The Hemsleys et al may sell ‘clean eating’ as an all-encompassing lifestyle, but most consumers know to pick and choose from this whatever works for them – they’re more likely to see clean eating as a reminder to make scratch cooking more of a priority or to eat more veg than as terrifying diktat.

What’s more, at a time when many people still don’t get their 5 a day, the wave of new products that’s been launched in response to the clean eating craze is surely to be welcomed. Fresh produce is hardly known as a hotbed of product innovation, but there’s been a marked step up in NPD activity of late. Sainsbury’s now has a dedicated section for ‘carb alternatives’ as part of its veg offering, featuring spiralised butternut squash, courgettes and – the latest addition – beetroot ‘rice’. Tesco, an early adopter of the spiralised veg trend, has just added cauliflower steaks (yes, really), while M&S has launched a wealth of fresh smoothie mixes and the infamous pre-cut and peeled avocado.

All of these are easy to dismiss as over-priced nonsense targeted at clean eating idiots with more money than sense, but if they encourage even just a small number of people to include more veg in their diets, what’s the harm?

We face huge dietary and public health challenges, and healthy eating messages are genuinely confusing. The current public ding dong on fat is just the latest example. Do clean eating proponents have a meaningful contribution to make in clearing up this confusion? Most likely not. But neither should they be painted as horsemen of the healthy eating apocalypse.

There are far bigger battles to fight.