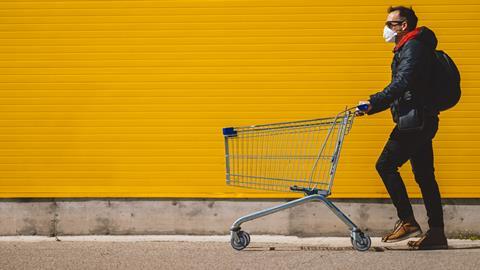 Shopping habits: how do they differ between men and women?

What makes men tick when it comes to grocery shopping? And how do their routines differ from those of women? Using a Harris Interactive survey of more than 1,000 UK adults, we compare male and female habits at every stage of the shopper journey – from deciding which store to visit to choosing how to pay – to find out their preferences.

When, where and why

Many dads across the nation will be buying the ingredients for their own Father’s Day dinner this weekend. Because although men are less likely than women to be the primary shopper in the household, with a third sharing the task with someone else, 61% say they have main responsibility for getting in the groceries (see chart below).

As our recent report on Britain’s favourite supermarkets revealed, Tesco is the preferred retailer for men in the UK (25%). But as the majority of men visit two retailers a week (47%), they might also be found at their next-favourite stores, Sainsbury’s (15%) and Asda (12%).

When it comes to choosing where to shop, both genders are most likely to be put off by stores that are more expensive than their rivals (42%).

Preparing for the shop

When preparing to head to the supermarket, most shoppers will ensure they have their own bags (81%). However, we see more of a split in habits when it comes to shopping lists (see chart below). While 70% of women will sometimes diverge from their list by adding extra items, men are more likely to stick to what they have planned. That said, more men (25%) than women (20%) won’t bring a list at all.

As well as sticking strictly to their shopping lists, it appears men are also set in their ways when it comes to buying brands (see table below). More men than women say they will stick to the brands they know and like, regardless of price, and while 60% of men will buy a product just because it’s on promotion, women are more likely to do so (67%). Males are also more likely to hunt down a particular brand or product they want, while more women will save time by plumping for an available alternative.

What’s more, despite the clichés surrounding men asking for directions, they have no qualms with asking staff for assistance when they can’t locate an item in store. Ninety per cent of men say they will ask for help sometimes or always, only marginally less than women (93%).

There are similarities in the length of time male and female shoppers spend in store, with 30 minutes to an hour the most popular duration of shop for both genders. However, men are likely to get their shopping done more quickly, with 41% saying they take 15 to 30 minutes, compared with 35% of women.

When it comes to paying, manned checkouts are the most popular choice for both men (42%) and women (39%), while 31% of shoppers opt for a self checkout most often. However, women (30%) are more likely than men (27%) to just join whichever till has the shortest queue.