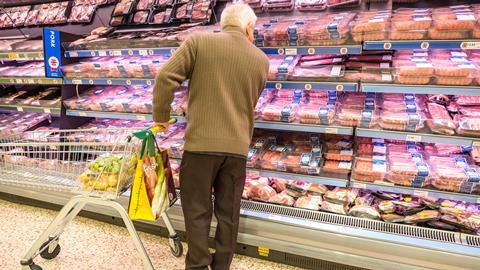 Shoppers love to play favourites. Anything from the shape of the car park to the number of checkouts can come into play when choosing which store to visit for the weekly shop. But are there key trends across age groups and gender when it comes to which retailer is their pick of the bunch? We commissioned a survey of over 1,000 British shoppers to find out more.

Turns out, men and women can agree on something. Both groups ranked Tesco as their favourite supermarket in our survey and it had a significant lead over the other retailers - voted top by 25% of men and 27% of women.

Most of the other big retailers scored faily evenly across both genders. Asda was voted favourite by 12% of men and women, Waitrose by 5% and M&S by 3%. There was only a 1% difference for Morrisons, with 9% of women and 10% of men ranking it as their favourite.

Among the big four, the biggest difference between the genders was at Sainsbury’s, with 18% of women voting it their favourite compared to 15% of men.

Discounter rivals Aldi and Lidl were in a tie-break among male shoppers with 11% of the vote for top spot. Women, however, were significantly more likely to say Aldi was their favourite. And contrary to the “mums go to Iceland” catchphrase, men were more likely to rank Iceland as their number one than women.

Again, across all age groups, most people in our survey said Tesco was their favourite supermarket. The only age groups where any other retailer came close to challenging Tesco was 18 to 24-year-olds, where Asda was just 3% behind in the vote for top spot, and 55 to 64-year-olds, where Sainsbury’s was just 4% behind.

Tesco had the clearest gap ahead of the next most popular supermarket among those aged 35 to 44. The supermarket giant scored 28% of the top vote for this age group, compared to the 16% achieved by its nearest rivals Aldi and Asda.

“The top aspects that would put consumers off visiting a particular supermarket are being more expensive than rivals, being too far from their house, and having a limited range of products, so it is likely that consumers feel Tesco best offers these benefits,” says Harris Interactive senior research executive Celia Ward.

”The 35 to 44s in particular place importance on the range of products, so this may be why their preference was stronger for Tesco over other supermarkets.”

As people get older, Waitrose climbs higher up the rankings. Ten per cent of the over-65s we surveyed said Waitrose was their favourite supermarket, more than any other age group and significantly higher than shoppers aged 25 to 54.

“As consumers get older, their children have flown the nest and so it’s likely they have more expendable income to be able to afford food luxuries from Waitrose,” says Ward.

“Waitrose stores are typically located in more affluent areas with an older demographic, and have probably less city centre locations than some other stores also meaning this older age group are more drawn to shopping there than younger consumers who may live in city centres.”

In contrast, none of the over 55’s surveyed said Iceland was their favourite supermarket. The frozen food specialist was instead most popular with 35 to 44-year-olds, securing 4% of the vote.

Asda and Aldi, meanwhile, scored higher among 18 to 24 year olds than any other age groups.

“The 18 to 24s are the group in our sample with the lowest income, and they’re also more likely to be students so are likely to be looking for value when choosing their supermarket, which they likely feel they get from Aldi and Asda,” explains Ward.

Considering what we’ve seen play out across age and gender, it should come as no surprise that Tesco won the popularity contest by some distance in our survey. Especially since the retailer has been voted Britain’s Favourite Supermarket at The Grocer Gold Awards every year for the last five years.

Speaking to The Grocer last November after Tesco retained its crown despite the challenges of Covid-19, Tesco UK & Ireland CEO Jason Tarry credited the supermarket’s popularity to its scale and hard working staff.

“We obviously had a good platform, with more than 3,000 stores, our online operations and the ability to scale up, but at the heart of that was our colleagues. They have put our values into action and got on with it,” he said.

“As a result, public perception of us as an industry is different. We’ve done an amazing job through the pandemic and we did our bit. Tesco has shown it’s at its best when it’s up against it.”

The data in this feature was supplied by Harris Interactive