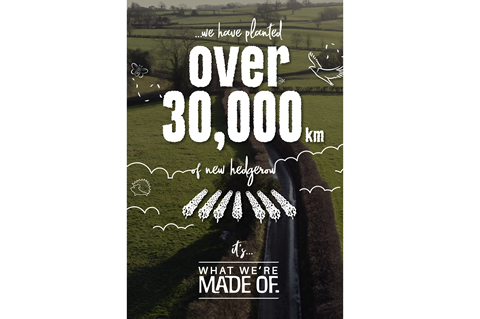 The industry body’s digital campaign, titled ‘It’s What We’re Made Of’, focuses on the sector’s progress against the UK Dairy Roadmap sustainability initiative – which was launched in 2008 and updated last year with the goal of UK dairy reaching net zero carbon emissions by 2050.

The marketing push focuses on three key areas of the roadmap – climate change, biodiversity, and plastics and packaging.

The 88 dairies from 50 companies who had signed Climate Change Agreements with the UK government had already seen an average reduction in Scope 2 emissions of 29% between 2008 and 2020, it added, while 43% of dairy farmers now used or produced renewable energy.

From The Dairymen: How is the dairy industry addressing climate change?

Achievements in biodiversity included the planting of 30,000km of hedgerows and 37,000km of grass margins planted under the Campaign for the Farmed Environment – the equivalent distance of London to Sydney and back, twice.

Meanwhile, the sector had made big gains on the packaging front, with plastic milk containers now one of the UK’s most recycled products, and 78% of plastic HDPE milk bottles having been recycled since 2008 – against an average for plastic bottle recycling of 58%.

“The UK Dairy Roadmap is one of the oldest roadmap initiatives in the agricultural sector, and acts as a public commitment to environmental sustainability by the entire dairy sector,” said Dairy UK CEO Judith Bryans.

“It addresses eight focus areas in which farms and dairies are set sustainability goals for 2025 and beyond. These are: climate change and energy, water, landfill, plastics and packaging, waste, biodiversity, soil and air quality,” she added.

“We have been working hard towards the sustainability goals set, with farmers and processors continuing to innovate and improve practices as we strive to meet our industry goal to net zero. Now, it’s time for us to share a part of this story, and what we’re made of, with consumers.”