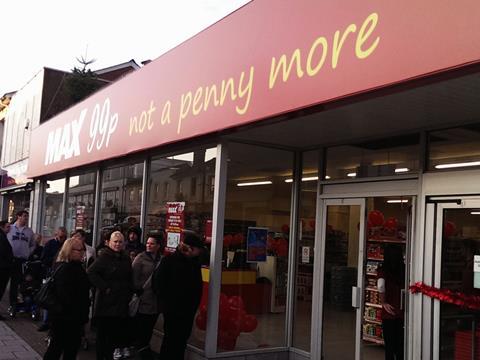 When Max 99p opened the doors of its fourth store in Woolston last December, shoppers quickly jumped to the wrong conclusion. “People assumed we were a pop-up shop,” says business development manager Dean Saunders. “But we’re here for the long haul.”

And just a few weeks in, with an average basket spend of £10, far higher than its three other stores in Peterborough, Chelmsford, and Pontypridd, the fixed price discounter does appear to have found a new home on the south coast.

Management duo Saunders and Srinivas Arumalla, who previously worked together at another high street discount chain, had been searching for a site in the area for some time when they came across the 3,230 sq ft property.

“It makes suppliers more honest because they have to be. Their half a penny is significant when buying the sort of volumes we are buying”

Following “significant” investment, the team opened up to customers six weeks ago, employing 14 staff, offering a range of between 3,000 to 3,500 SKUs, all priced at a maximum of 99p. Saunders believes the format offers “a twist on fixed price retailing” with a focus on suburban locations, rather than city centre locations clustered with discounters.

The store also uses wider aisles suitable for mums with buggies or elderly ­customers, and cashiers are encouraged to interact with those they’re serving and gather feedback, which is then fed back up the management chain of command to inform change.

“There have been a lot of people trying to do similar things in the sector,” adds Saunders, who has 35 years retail experience behind him. “We all buy from ­similar suppliers but our advantage lies in our layout and good customer service.”

Saunders says well known brands are “critical” components of its range. For instance, it currently offers 500g packs of Napolina pasta for 75p compared with £1.30 at Tesco. It also offers regular 2 for 1 promotions on basics like bread, where customers “expect a deal.” Saunders adds its indie agility means it can always lower margins to cut prices and beat the competition.

The store, which is open from 8am to 6pm Monday to Saturday, and 10am to 6pm Sundays, has also shunned a growing tendency among other fixed price retailers to offer ranges, such as furniture, that break the 99p price tag, a move Saunders believes can be confusing for the customer.

Becoming a Nisa member has been “a great source of knowledge” to the chain, he adds. It sources chilled and ambient goods from the symbol group when monthly promotions allow it to meet their price points. But Saunders is quick to point out that Nisa is just one of 200 suppliers feeding into the range, many of whom now cater specifically for the growing fixed price market.

“It makes it more competitive and makes suppliers honest because they have to be,” he says. “Their half a penny is significant when buying the sorts of volumes we are buying.”

Those volumes are only set to increase, with the management team keen to open nine to 10 more stores in 2015. But with four under their belt already, what has been the biggest challenge so far?

“There’s something new every day,” laughs Saunders, wryly. “But it has been, and continues to be, tremendous fun. And if we can continue to enjoy what we are doing then we can ­overcome most things that are thrown our way.”