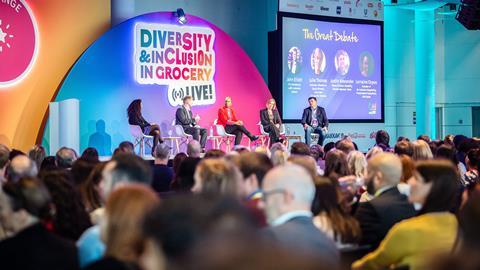 What is the grocery industry doing to improve diversity & inclusion?

You might expect diversity to have taken a back seat during the pandemic. Yet that couldn’t have seemed further from the truth at GroceryAid’s D&I in Grocery Live! event, held in Wembley last week, where industry leaders passionately discussed their progress.

It’s the culmination of the GroceryAid DiG programme, which has involved a year of mentoring and shared learning.

So what is the industry doing to promote diversity? And what are the key principles of a successful strategy? Here’s what we learned at the event.

The strain of the pandemic has brought mental health into sharp focus, encouraging businesses to listen more to workers.

Remote working has proved surprisingly advantageous in this area. The virtual environment has enabled employees at all levels to feel more comfortable raising concerns, delegates said at the event. That is especially true of big businesses, where they might otherwise have to speak in a room filled with hundreds of colleagues.

P&G held its ‘Equality and Inclusion Month’ celebrations virtually for the first time in March, and the format “played a key role in ensuring everyone from our business was included”, says Northern Europe sales VP Ian Morley.

A McKinsey report in May last year raised concerns that diversity and inclusion could “take a back seat” in the “challenging context” of the pandemic. But it could not have accounted for another seismic event: the global Black Lives Matter movement following the tragic murder of George Floyd.

For Tesco, among others, it provided the impetus to ensure the pandemic “hasn’t hampered our efforts to achieve D&I goals”, says Toni McKay, the supermarket’s head of diversity and inclusion.

Steps by Tesco have included introducing a new training scheme for line managers that aims to help them better respond to diverse needs within their teams, and make everyone feel welcome and listened to.

It’s just one example of how the BLM protests across the world prompted a wave of new measures from businesses as they looked harder at how they could tackle inequality. Others include The Co-op’s new set of commitments to diversity in September 2020 and Asda’s first ‘Inclusion Month’, which invited staff from different backgrounds to share their stories in 60-second videos.

Boardrooms are becoming more diverse. That’s according to an upcoming IGD report, due to be published in full next month, which suggests an increase in gender and ethnic diversity at leadership level in grocery.

Nevertheless, JLP chairwoman Sharon White would like to see businesses set more targets to unlock change on a wider scale.

It’s worked for JLP. By November, its eight-person board will include six women and four members from an underrepresented ethnic background.

It hasn’t been easy, says White. A recently created internal inclusion committee was forced to have “challenging conversations” but “discomfort is a sign we’re making progress”.

Gender and ethnicity are the most commonly talked about areas of diversity, but most businesses still don’t broaden that definition to include support for transgender and LGBTQ+ people, says BP diversity and inclusion consultant Bobbi Pickard.

There is also room for greater inclusivity in product development, says P&G’s accessibility leader Sumaira Latif. Small changes such as ridges on a bottle to help the blind or partially sighted distinguish shampoo from conditioner could make a real difference, Latif says.