Sales of eggs still surging as consumers opt for British 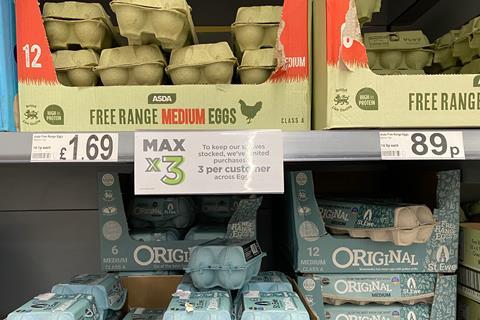 Sales of eggs have surged by more than a third as their soaring popularity among Brits continues to grow during the coronavirus pandemic.

The figures follow a period of “exceptionally high demand” for shell eggs, as Sainsbury’s put it in May, after it was forced to source eggs from Spain and Italy to keep shelves full.

Lidl has also looked outside the UK for eggs, while other supermarket chains have periodically faced shortages of fresh eggs during lockdown, leading to price rises on some SKUs.

But amid reports of Sainsbury’s moving to slash prices on its unwanted imported eggs over the past month (with boxes selling for as little as 37p in some stores), shoppers, retailers and food manufacturers were largely looking for “the reassurance of higher production standards” of UK-grown eggs, suggested the British Egg Industry Council.

This was reflected in a 28% or 2.5 billion egg increase in UK production over the past decade to a total of 11.39 billion eggs last year, according to BEIC data.

“Consumers want the eggs used in products to be British and, at long last, retailers and manufacturers have recognised this,” said BEIC chairman Andrew Joret. He added the number of eggs (in shell or product format) imported was now at its lowest level since 2011.

“As we approach Brexit, we fully anticipate more food companies will look for the guaranteed standards of the British Lion mark,” Joret said.

“This year, we have seen the impact of the Covid pandemic on the market, which has led to a huge surge in egg consumption and had a major impact on egg availability around the world. However, we believe that, as the market returns to normal, we will see the long-term trend towards British Lion processed eggs continue to gather momentum.”