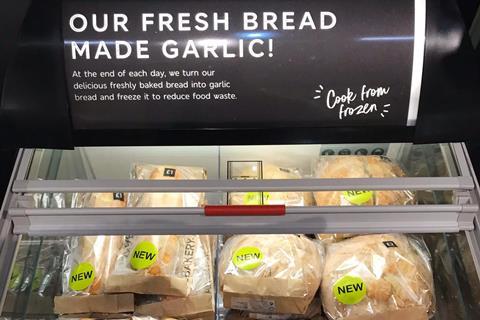 Staff slice the unsold baguettes and boules, fill them with garlic butter and freeze them for an extra 30 days’ shelf life

M&S is turning leftover baguettes into garlic bread and crostini to reduce waste.

At the end of each day, staff slice the unsold baguettes, fill them with garlic butter and freeze them for an extra 30 days’ shelf life. Unsold boules are being repurposed in the same way.

It follows the introduction of a similar initiative turning leftover baguettes into packets of crostini in 580 M&S in-store bakeries across the UK and Ireland. After being sliced in a bakery machine, brushed with olive oil and toasted, the bread gains an extra seven days’ shelf life.

Last summer Tesco also began a 24-store trial of making crostini and bread pudding from unsold baguettes and batons. The repurposed products are among the most wasted at UK supermarkets, according to Wrap.

M&S said the baguettes were baked daily and, while most sold on the same day, the company was always looking for ways to cut waste. The measures were part of its work to halve food waste by 2025.

The crostini packets cost £1.50, while the garlic baguettes and boules are £1 and £2 respectively. Both initiatives had been well received by customers, M&S said.

M&S reported a 1.4% rise in food like-for-likes in the 13 weeks to 28 December, but “disappointing” food waste levels had kept forecast full-year margins at the lower end of guidance, CEO Steve Rowe said in January.

The retailer is in the process of rolling out new supply practices across its estate this year. The ‘Vangarde’ projects is intended to reduce stock levels, cut waste and lower costs.