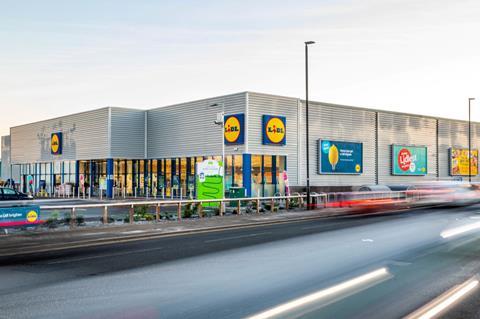 A new Lidl in Heston, west London (pictured), is one of six set to open this month

The 900th British Lidl, on Liverpool’s Edge Lane, near the city centre, is one of six set to open this month, creating nearly 250 jobs between them, according to the discounter.

The other five include two new branches in Greater London – in Heston and St Mary Cray – and one in Newcastle.

Lidl said it had opened more than 50 stores in the last 12 months, putting it on track to reach its 2025 target.

Since the 2016 appointment of Lidl GB CEO Christian Härtnagel, who is due to hand over duties to replacement Ryan McDonnell from next month, over 240 Lidl stores have been opened, along with seven distribution centres.

“The opening of our 900th store reiterates our ambitious plans and commitment to Great Britain,” said Härtnagel.

Read more: Christian Härtnagel’s legacy of loyalty and the next steps for Lidl GB

“I would like to take this opportunity to thank all Lidl colleagues for their hard work and dedication, particularly given the challenging context of the past two years.

“As our expansion continues at pace, we look forward to opening our doors to more communities up and down the country in the coming months and years and guaranteeing high quality at the lowest prices for even more families.”