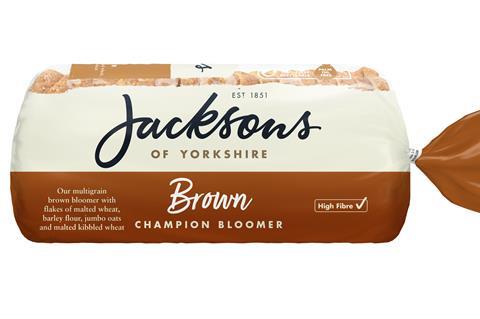 The new packaging contains 25% less plastic than before and is 100% recyclable, Jacksons said

Jacksons bakery has given its range of Yorkshire’s Champion bloomers and rolls a new look and name.

Now called Jacksons of Yorkshire, the brand has also been given a makeover removing 25% of the plastic from its packs.

Jacksons marketing manager Deborah Dyson said the revamp was “about modernising the brand” and giving Jacksons “more potential to develop the range into new areas”.

It was “the beginning of a new exciting era for us, with more NPD coming soon,” she said.

It said the move was the result of a year’s work, reformulating the recipe “again and again” until it was happy it had “exactly the same product without the need for palm”.

The range is sold at Waitrose and Ocado nationwide, as well as Tesco, Sainsbury’s, Co-op, Booths and Nisa regionally.