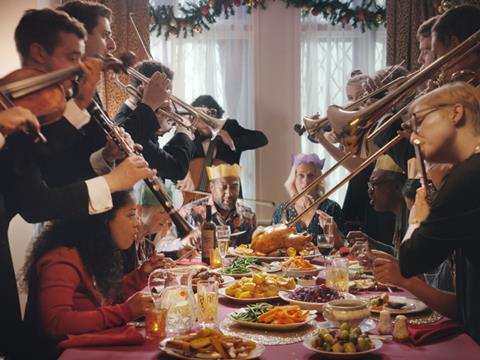 Lidl has launched its Christmas TV ad campaign with slots on ITV’s Coronation Street and X Factor as well as Channel 4’s Gogglebox.

The 20-second ads show characters who have “upgraded Christmas” by shopping at Lidl, but who have also gone too far in their festive preparations.

In one, a man has “upgraded Christmas” with Lidl party food but also by “importing snow from the North Pole”. He’s shown getting knocked off his feet by a rush of water as he opens a wooden crate on his driveway. “Oh, Nigel,” says the voiceover.

In another, a woman has “upgraded” with Hortus gin but also with a “75ft Canadian fir tree” that only fits into the room on its side. “Bit ambitious,” the voiceover says.

A third shows a woman who got a Lidl free-range turkey but also a 16-piece orchestra to play in her dining room. “Ho ho ho? No no no!” adds the voiceover.

A Lidl spokeswoman said the ads aimed to “take typical occasions to extremes” and that “each has its own comedic twist to bring a hilarious angle to the series”.

They were created by ad agency TBWA\London.

The three made their debut during tonight’s episode of Coronation Street, which started at 7.30pm. The Hortus gin ad is to be repeated at 9.15pm during Gogglebox and again during tomorrow’s X Factor, along with the party food ad.

“Christmas is a time to go the extra mile when treating friends and family, and with this series of adverts we want to demonstrate that Lidl is the only place to properly upgrade your festive celebrations,” said Ryan McDonnell, Lidl UK’s commercial director. “Our classic humour and imagination runs through the series, providing Lidl laughs and mouth-watering products to marvel at.”