Mariah Carey to be face of Walkers Christmas campaign 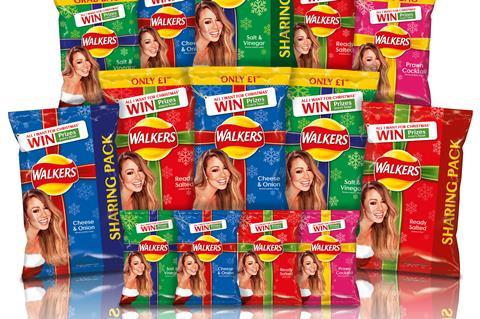 The push will run until the end of December

The PepsiCo-owned crisp brand would not reveal the exact figure of the festive push but described the activity as its biggest yet.

As well as featuring in Walkers’ seasonal ad, which is set to air in November, the US singer will be the face of an on-pack promotion giving shoppers the chance to win prizes every hour.

Designer headphones, cash, games consoles and festive socks will be among the 3,500 prizes given away as part of the push. It will launch on 28 October and run until the end of December.

It is 25 years since Carey’s festive hit All I Want For Christmas Is You was released.

The activity is being supported by a “heavyweight” marketing campaign, including TV, digital and in-store activity over the next couple of months.

Walkers saw its sales and profits hit last year by consumers shifting away from its core range and a poor potato harvest increasing costs.