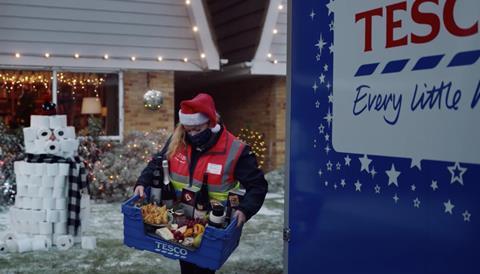 The ad follows people as they prepare for the festive season by confessing their sin of the year, including buying too much loo roll

Tesco is to tell the nation it deserves a treat after the trauma of 2020, as it launches a tongue-in-cheek Christmas ad campaign this weekend.

Opening in a Tesco store, before travelling across the UK, the supermarket’s ad, set to Britney Spears’ song ‘Oops! … I Did It Again’, follows multiple people as they prepare for the festive season by confessing their sin of the year.

These include not contributing to Captain Tom’s fundraising campaign, Santa taking a corona vacation and a customer confessing to buying too much loo roll, which his family builds into a snowman.

But they then hear the voice of Tesco, voiced by comedian Asim Chaudhry, encouraging them not to think twice, because they deserve to tuck into the finest food and drink after the year they have had.

The concept was developed by creative director, Tom Drew of BBH and directed by Raine Allen-Miller from production company Somesuch. It will makes its debut tomorrow during ITV’s The Voice.

“We know that the festive ads mark the start of the season for a lot of people and that this year, customers were looking for something fun and uplifting, that would help spread a little joy,” said Alessandra Bellini, chief customer officer at Tesco.

“When we talked to friends, colleagues and customers about the concept, everyone instantly confessed to the naughty things they’ve done during 2020 with a wry smile. It’s really relatable and we hope it resonates with people and gets them talking.”