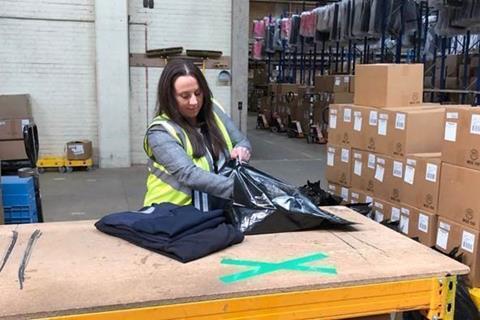 M&S has extended its support for the NHS by giving clothing to more hospitals.

From this week, the retailer is donating parcels of clothing for discharged patients to four more hospitals, in Belfast, Glasgow, Cardiff and Birmingham.

M&S has been delivering the clothing packs to the NHS Nightingale Hospital in London since earlier this month. Each contains a t-shirt, jumper, joggers, underwear and socks, in a range of sizes.

The aim is to “help provide patients some comfort and normality when they get discharged”, M&S said in its latest update to customers.

Thousands of the packs are to be despatched from a warehouse run by Clipper Logistics in Peterborough.

“We are pleased to be able to support such a great initiative during these unprecedented times,” said Clipper Logistics executive chairman Steve Parkin. “To be able to work together to support the NHS in a critical time, providing a service that will have a direct positive impact on those who are most in need, is humbling.”

It is the latest in a series of steps announced by M&S to support the NHS during the coronavirus pandemic.

Others include a twice-weekly free food delivery service for staff at St Mary’s Hospital, Paddington, and Great Ormond Street Hospital. Nearly 5,000 prepared meals, sandwiches and treats are to be delivered to the hospitals weekly for the next two months.

Further clothing donations are seeing thousands of t-shirts go to the NHS Nightingale frontline team in London to form part of their uniform pack.

Some 4,000 sets of pyjamas are destined for NHS Derbyshire, near M&S’s Castle Donington distribution centre, to be used as scrubs.

M&S has also launched specially designed bags for life in its 560 Food Halls. For every one sold it is giving 10p to NHS Charities Together to support staff and volunteers caring for Covid-19 patients. The bags, featuring a rainbow made of hearts, cost 20p, and the 10p donation accounts for 100% of the profits.