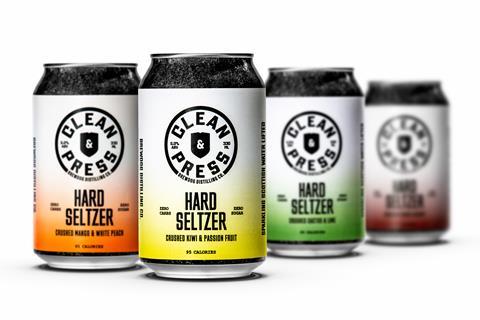 BrewDog is to launch its own hard seltzer brand, called Clean & Press.

Kiwi & Passionfruit was “layered intensely with ripe kiwi and punchy passionfruit” with “a crisp taste and quenching finish”, while Cactus & Limes “delivers waves of watermelon and lychee which riff perfectly next to the zesty lime”, said BrewDog.

Unlike typical US hard seltzers, which are made by fermenting either malted barley or cane sugar, BrewDog’s are made by mixing the brand’s Rogue Wave vodka with sparkling water and natural fruit flavours, which BrewDog said made “an innovative and refreshing beverage that offers all the benefits of the seltzer category”.

The drinks contain zero sugar and 95 calories per 330ml can.

BrewDog had “always looked to the future, using it to inspire the way we operate, encouraging our team to embrace innovation”, said its CEO James Watt.

The news makes BrewDog the latest in a series of major suppliers jumping on the hard seltzer trend.

Mike’s Hard Seltzer, the US brand distributed in the UK by AB InBev’s ZX Ventures, announced its impending launch into Morrisons and Tesco this week after reformulating its recipes to give them “a more intense taste”.

The Grocer revealed in February Tesco’s plans to launch dedicated hard seltzer bays to cash in on the growing trend.

Read more: can boozy sparkling water recreate its US success in the UK?