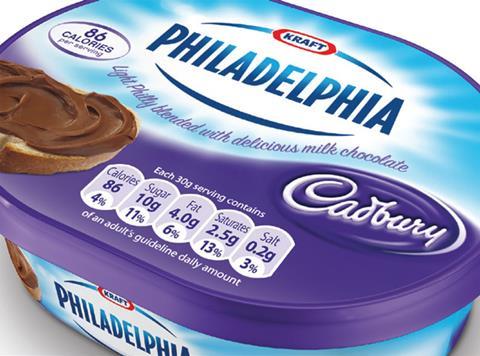 That was the message pushed by an agitated Jennifer Saunders in a TV ad for Philadelphia with Cadbury when the chocolate-flavoured soft cheese launched in 2012.

Turns out she was right. Mondelez has quietly pulled Choccy Philly from British supermarket shelves.

“For now, we are focusing on our savoury lines,” says the company, which removed Philadelphia with Cadbury during the last quarter of 2015.

The demise of Choccy Philly is perhaps not surprising given initial reactions to the launch (at the time, The Sun warned Mondelez was “risking the fury of the nation” by mixing the iconic chocolate into cream cheese), but it is curiously at odds with the rest of the world. Look at Philadelphia’s product portfolio in several other countries and you’ll find no shortage of sweet cheese flavours: variants available in the US include strawberry; brown sugar & cinnamon; and pumpkin spice; plus, there’s an entire ready-to-eat cheesecake fillings range. In Canada, meanwhile, Philadelphia comes in a mixed berry flavour.

The choc-and-cheese combo that failed to win over shoppers in the UK is also proving popular closer to home: Germany has Philadelphia with Milka, for example, while Sweden, Finland and Norway have added their popular Marabou and Freia milk chocolate brands into Philadelphia (Finland also does a honey Philly).

So why did Choccy Philly not work in the UK?

Category and marketing experts believe the answer lies as much in Brits’ taste preferences as in the level of marketing support Mondelez put behind Philadelphia with Cadbury.

The product actually got off to a strong start in the UK, says Mintel’s global food and drinks analyst David Turner. “But a relatively ‘new’ trend needs lots of marketing support to keep maintaining interest and I don’t recall a significant campaign post-launch to maintain trial levels.”

Indeed, that’s Mondelez’s read of the situation too. “In the first 12 months following launch, Philadelphia with Cadbury generated £9.3m,” the company says. “However, repeat rates were not sustained once specific media investment ceased.”

Continued media support would have been crucial because Choccy Philly had a far steeper mountain to climb in the UK than similar products in other countries. That’s because sweet spreads is not an established category over here in the way it is elsewhere, says Turner. “Whereas in Germany, France etc it is not just Philadelphia – a number of other spread brands have chocolate spreads in the chiller, so while this adds competition it is also more likely to bring consumers to the category.”

For a single brand to try and change consumer perceptions all on its own is a huge task – especially as many brands owners have a tendency to overestimate the “pull” of their brands, argues Hamish Renton of consultants HRA. The chocolate-and-cheese combo offered by Philadelphia with Cadbury also faced other challenges. “It’s effectively pitched as a ‘skinny indulgence’ product and that’s all about yoghurt and milkshakes rather than cheese,” says Renton. “It’s had a relatively narrow set of applications in terms of home baking, cheesecakes etc, and it delivered the ‘sweet but sour’ taste experience, which is an acquired taste.”

Added to this is a retail environment where range rationalisation is top of the agenda. As grocers trim back their ranges, novelties like chocolate soft cheese often become early casualties. This isn’t just the case for brands – Tesco launched an own-label chocolate cheese spread after Philadelphia with Cadbury came on to the scene as well as chocolate-flavoured cheese slices, but these have long since been pulled.

Having said this, both Turner and Renton acknowledge Philadelphia with Cadbury had a decent run, even though it ultimately didn’t last the distance. “It lasted about four years, so that’s not a bad result,” says Renton. “Commercially, it’ll have been a modest success in Kraft/Mondelez terms.” Meanwhile, Turner points to a contingent of “hardcore devoted fans in the UK who are missing the loss”.

All this suggests chocolate cheese could yet develop legs in the UK – provided someone is willing to spend big to persuade Brits once more that choccy cheese really is far from silly.