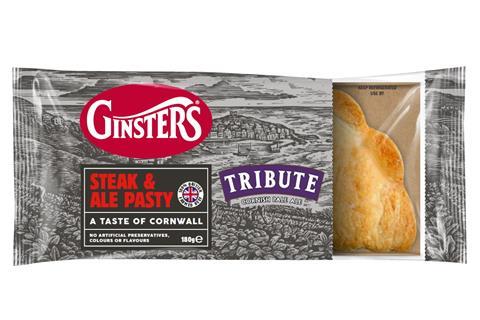 Ginsters has reinforced its Cornish credentials by teaming up with St Austell Brewery to create a new Steak & Ale Pasty.

Debuting in Tesco chillers from 11 November, the pasty is said to be made with Red Tractor assured British steak marinated in St Austell’s Tribute Ale, potato and leek, wrapped in light puff pastry (rsp: £1.70/180g).

The pasty maker said it offered a “Cornish twist” – St Austell has brewed in Cornwall for 150 years while Ginsters has baked in the county for 50.

Ginsters MD Kieran Hemsworth said the brand was ”thrilled to be partnering with Tribute Ale, who we know share our values around Cornish heritage, pride and quality, to bring a popular pasty recipe back to consumers”.

“The Ginsters Steak & Ale Pasty is a Cornish take on the classic steak and ale flavour combination and will appeal to consumers looking for a balanced, satisfying meal-in-one,” he added.

In September, Ginsters unveiled its second vegan product of the year when it joined forces with Quorn to create a plant-based pasty, containing marinated Quorn pieces with locally sourced potato, onion and swede, encased in puff pastry.