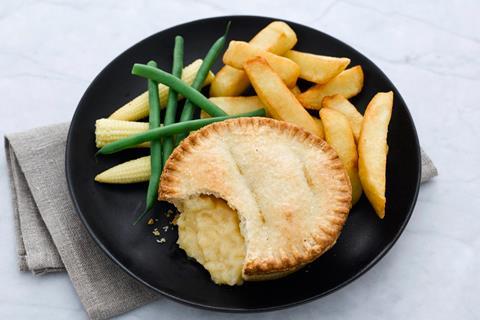 The pies have rolled into Asda

Holland’s Pies has teamed up with Wyke Farms to create a new deep fill mature cheddar cheese and onion pie.

The new pies are pre-baked, and can be microwaved in five minutes. The collaboration is billed as having ”enabled a truly unique tasty, rich and creamy mature cheddar cheese & onion pie to be created”.

The launch will be backed by a push on social media, and a further marketing and comms campaign to follow over coming months. A chilled, single-serve version will also be launched in 2020.

Holland’s Pies said it wanted to lure more vegetarians to the brand.

“Not only are we offering consumers a quality pie, we are pairing that with the distinct flavour of Wyke Farms award-winning mature cheddar cheese.”