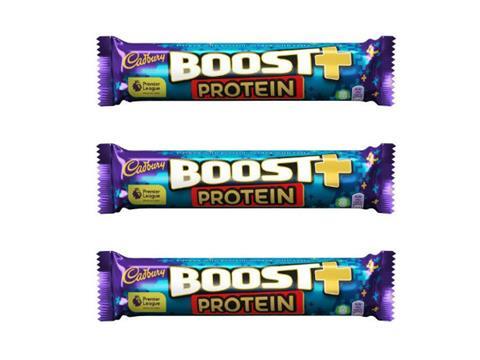 Mondelez has jumped on the protein bandwagon with the latest addition to its Cadbury Boost range of chocolates.

Boost + Protein contains 12g of protein – which is four times more than the standard Boost bar, as well as 32% less sugar. It features the same milk chocolate and caramel combination of the original bar, but with ‘protein crisps’.

The NPD rolls out from 30 July, backed by a £1m campaign covering out of home, sampling, PR, digital and social media. On and off-shelf PoS will also be available (rsp: £1.49/49g).

Cadbury had “crafted this bar over time to ensure that we can meet the consumer need for protein while still delivering the great taste and hunger satisfaction of the standard Boost bar”, said Cadbury singles brand manager Richard Weisinger.

“Our recipe had fantastic results in consumer taste tests vs competitors, with liking scores on par with standard Boost.”

The protein bar market is growing at 54% year on year, according to Mondelez. It was being driven “by the lifestyle, taste-driven segment as mainstream consumers look for ways to boost energy and balance their diet”, the brand said.

Indeed, traditional chocolate bars are fast losing ground to healthier options, and the last year has seen a slew of snack bar NPD, many of which play up their protein credentials.

Mondelez’s launch comes two years after rival Mars made its debut in protein bars in 2016 with protein versions of Mars and Snickers, which contain 19g and 18g of protein respectively.