Pukka launches Just For Two range of pies for sharing 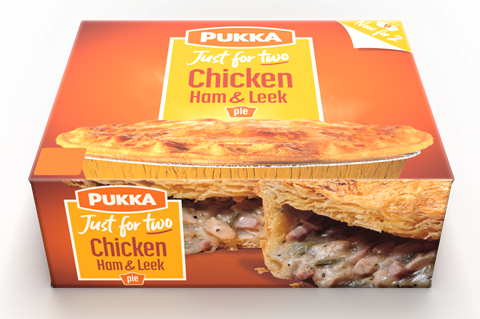 The pies are encased in 144 layers of puff pastry

Pukka Pies has launched a trio of pies designed for sharing.

The range, called Just For Two, comprises three flavours – Steak & Red Wine, Chicken Ham & Leek and Vintage Cheddar & Leek – all of which are encased in 144 layers of puff pastry.

Head of marketing Rachel Cranston said Pukka had found sharing pies often caused confusion around how many people they should serve, which is why Pukka wanted to make it clear, with the name, that these pies were for two people.

The packs will also feature a ‘New for 2’ flash and illustrations to show how the pie can be split.

The Just For Two range will hit Sainsbury’s from 23 September, followed by Morrisons on 12 October (rsp: £3/450g).

The launch comes hot on the heels of Pukka’s new vegan range, which launched last week. The vegan range comprises two SKUs – Vegan Chicken & Mushroom and Vegan Minced Steak & Onion – which are made with soy protein chicken and steak-style pieces in place of meat.