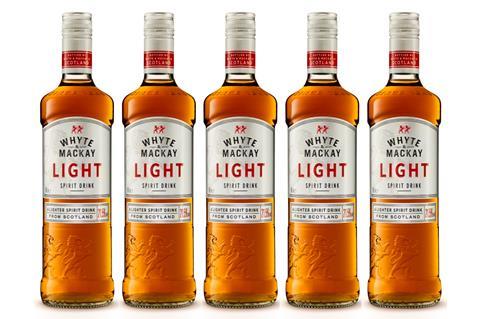 Whisky giant Whyte & Mackay has unveiled a new ‘light’ spirit drink it claims is the first of its kind.

Called Whyte & Mackay Light, it is not technically a Scotch whisky as it comes in at 21.5% abv – to be considered whisky it would have had to be bottled at a minimum of 40%.

However, it is made with the brand’s core blended Scotch as a base, which is then “enriched by sweet sherry casks and freshly emptied bourbon barrels”.

“We’re using the strength of one of our existing brands to deliver an attractive option for the growing number of consumers who may be looking to keep an eye on their alcohol intake,” said Whyte & Mackay head of innovation Rod Gillies.

The NPD can be drunk with a mixer or straight over ice just like regular Scotch, he added.

The launch marks the latest in a series of moves from Whyte & Mackay as it attempts to revitalise its blended Scotch portfolio and draw younger shoppers into the category.

Last year, for instance, it launched The Woodsman, a blended Scotch targeted at younger shoppers by ditching traditional category cues, which was named The Grocer’s top launch in the spirits category in our Top Products Report 2018.