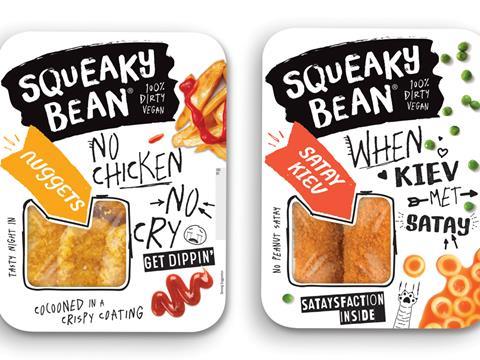 The new brand, dubbed Squeaky Bean, will initially comprise three chilled SKUs: Satay Kiev, Fishless Fingers and Nuggets. The three-strong line-up is set to roll out in 300 Asda stores from 28 January, after nearly a year in development.

It is the first plant-based range owned by Winterbotham Darby, though it already distributes Dutch vegan meat brand Vivera in the UK.

The Surrey-based team behind the range said it was “inspired by the best vegan food you can eat out and bored by the vegan offer in supermarkets”.

In depth: How vegans are embracing dirty burgers and decadent desserts

Despite the name, the products do not contain beans, and are instead made with soya and wheat proteins. The range of “dirty vegan” junk foods were “convincing” meat-free alternatives to the type of beige fare often enjoyed with baked beans, said brand co-creator Sarah Augustine.

“We wanted to recreate those childhood favourites and give people the choice to eat something more indulgent,” she added. “We’ve created an exciting brand to sit away from the rest by giving consumers something that’s messy but not necessarily basic.”

The products are manufactured in a segregated factory in the Netherlands, but carry warnings related to animal-derived allergens.

It comes as Mintel revealed the UK had overtaken Germany as the world leader in vegan food launches in 2018. The share of NPD with a vegan claim doubled from 8% in 2015 to 16% last year, found the market intelligence agency. Meanwhile, the maturing and saturated German market for plant-based had seen vegan NPD fall two percentage points to 13%.