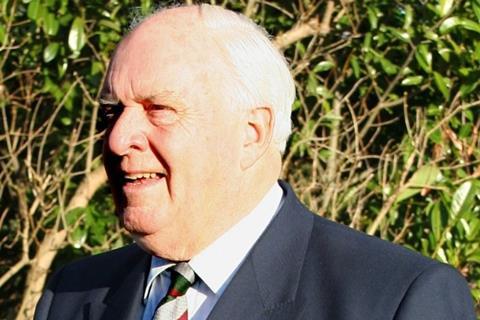 Naish was knighted for services to agriculture in 1994

Tributes are pouring in for former NFU president Sir David Naish, who has died aged 78.

During his time with the dairy co-op in the mid-2000s, he oversaw the merger between Arla Foods UK and Express Dairies. He later took on a host of roles, lending his expertise in the food and farming sectors first as chairman of meat processor Hilton Food Group, then on the board of Greenvale and Jersey Royal Potato Company owner Produce Investments.

Extremely saddened to hear of the death of former President of the NFU Sir David Naish. He was a powerful figure who led the farming industry with great distinction. He gave me excellent advise and encouragement over the years and will be fondly remembered by all who knew him.

He was knighted for services to agriculture in the 1994 Queen’s Birthday Honours.

Incumbent NFU president Minette Batters paid tribute to Naish for steering the beef industry through the tumultuous period surrounding the BSE outbreak, praising him for limiting the damage to the British beef industry.

“Sir David was well known and highly respected both nationally and internationally for his knowledge, integrity and commitment to British farming,” she said.

“Those who worked with him during his time as NFU president have described him as a very kind and considerate giant in the farming industry, well respected, always credible, with a warm sense of humour, who always had time to listen.”

Very sad to hear news about death of Sir David Naish. My first day with the NFU in 1994 was the official opening of the Newmarket office with Sir David cutting the ribbon - a gentleman!