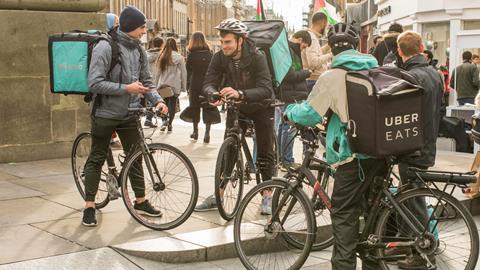 A group of Uber drivers have won the right to be classed as workers. What are the implications?

The Supreme Court last week ruled that a small group of Uber drivers had the right to be classed as workers, and so were entitled to paid holiday and at least the minimum wage.

It ended a six-year legal battle for the drivers, with the ruling hailed as a “landmark decision” that would “fundamentally re-order the gig economy”.

“We consider it likely that many in the gig economy will be able to acquire worker status, unless their employers fundamentally change their business models,” she adds.

But will they? Can they? And what will the repercussions for this competitive market be?

The crux of the Uber case was that “although the contracts made the drivers out to be self-employed sub-contractors, the reality was that they were in fact ‘workers’ due to the level of control Uber exercised over them” in terms of bookings, terms and customer interactions, explains Ella Bond, employment law solicitor at Harper James.

While the arrangement has not been tested specifically for other firms, there are “strong similarities between Uber drivers and Uber Eats and Deliveroo that cannot be ignored,” adds Charlotte Farrell, associate employment solicitor at Paris Smith.

Before changing the low-cost employment model that has allowed them to scale up so quickly, These courier operations are expected to firm up their legal defences. Uber has told Uber Eats riders the ruling “does not relate” to them, The Grocer revealed last week.

But law firm Leigh Day, which represented several of the Uber drivers in the case, says active claims against couriers taking on Stuart – whose riders deliver groceries for Co-op, Waitrose, Ocado Zoom and Sainsbury’s, among others – are “likely to be impacted”. Deliveroo and Amazon are also facing legal challenges on worker rights.

The decision has re-energised the unions bringing the cases. “This victory sets a thundering precedent for precarious workers and paves the way for other ‘gig economy’ workers to take back the rights they should never have been denied,” the Independent Workers’ Union of Great Britain told The Grocer.

Drivers and riders are “cruelly sold a false dream of endless flexibility and entrepreneurial freedom” says the App Drivers & Couriers Union. The court’s decision begins to “bring an end to rife exploitation of workers by means of algorithmic and contract trickery” general secretary James Farrar, a co-lead claimant in the Uber case, adds.

The courier companies have well-resourced legal teams and politicians appear to have turned a blind eye to their cause. Many of the seven ‘core recommendations’ of the 2017 Taylor Review into Modern Working Practices “have yet to be implemented” the House of Commons tracker notes. And the government is yet to respond to a 2019 Good Work Plan consultation “to address the issue of ‘one-sided flexibility’”. An Employment Bill promised by Boris Johnson in 2019 is  also yet to materialise.

Gallingly for some, health secretary Matt Hancock and business secretary Kwasi Kwarteng have even lent their weight to Deliveroo’s PR activity in recent months.

“During the six years of the proceedings, we’ve watched the government commission and then shelve a review of the gig economy, yet do nothing to help us,” Uber co-claimant Yaseen Aslam adds.

Nevertheless, legal experts predict victory for riders in their fight for rights. “The more control a business has – and the more limits they place on how someone provides the services – the greater the risk the person may be found to be a worker,” says Farrell.

In response, courier operators may try to change their relationship with riders – and how they take and delegate orders – to avoid the risk.

But if they can’t – the bar now is what happens in practice rather than what’s written in a contract – they will need to adhere to the responsibilities associated with workers’ rights and “an increase in costs for gig economy-based businesses is inevitable,” she adds.

Indeed, Uber has already admitted as much. In its 2019 IPO prospectus, it noted a widespread change to driver dealings would “require us to fundamentally change our business model, and consequently have an adverse effect on our business and financial condition”.

Meanwhile Deliveroo’s 2019 accounts, filed in December 2020, made a legal provision for “ongoing legal and arbitration proceedings of £32m,” noting “changes to regulation or legislation, in particular to employment status or tax legislation posing specific challenges to companies within the gig economy… as a principal risk and uncertainty facing the business.”

This ruling could also shake the low-cost delivery proposition of Amazon, which utilises its Amazon Flex courier base to fulfil orders.

“Higher costs may well be reflected in higher delivery fees for consumers,” Bond adds. And convenience premiums on groceries delivered by Uber Eats and Deliveroo might be driven too high for consumers too.

4.4% of the UK population work in the gig economy

21% of them are involved in food delivery services

Half of Deliveroo riders are students

Among them is Just Eat, which is jettisoning the use of Stuart riders to supplement its delivery service in London and Birmingham before doing the same across the UK, The Grocer can reveal. Just Eat Takeaway – through which users can order Asda and c-store groceries – employs its riders directly.

Just Eat CEO Jitse Groen was damning of the gig economy last week, saying it had “led to precarious working conditions across Europe, the worst seen in a hundred years”.

Rapid grocery delivery upstarts like Getir and Weezy have also rejected the use of third-party courier partners.

Such operators stand to be the “clear beneficiary of the movement against gig economy practices”, which brings “huge implications” for rivals, says Andrew Porteous of HSBC Global Research. It sets the scene for Just Eat in particular to snatch supermarket partnerships from Uber Eats and Deliveroo. Earlier this month brokerage firm Jefferies said Just Eat was “finally positioning itself to be more active in grocery”.

Supermarkets are also likely to be increasingly cautious about partnering with gig economy-based platforms. Coming IR35 reforms, originally scheduled for April last year but now due this spring, will likely add to their growing aversion to non-direct employment.

The reforms switch responsibility for determining a contractor’s status and, if appropriate, PAYE and National Insurance contributions, from themselves to the end-user business.

The Uber ruling “throws ‘inside IR35’ into chaos”, says James Poyser, CEO of contractor accountancy InniAccounts. “Currently, inside IR35 means you’re treated as a worker for tax purposes, but without any rights that workers are afforded. As a result of this landmark trial, it’s likely those deemed inside IR35 are, in fact, workers, and thus afforded protections.

“It is no longer acceptable for organisations to abuse the rights of workers, even if their tax status differs from their employment status,” he adds.

While its true impact may take time to materialise, the Uber ruling “obviously has huge implications for businesses that rely on the gig economy” believes Porteous

“It is a clear sign of the increasing pressures on platforms that utilise gig economy labour to provide a service below its true economic cost and, in many cases, still struggle to turn this into a profitable enterprise,” he argues.