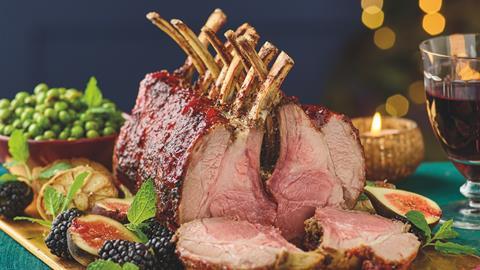 Morrisons is sticking to the classics for Christmas 2021.

The retailer says its favourites in its festive range include a Scottish smoked salmon, triple smoked over oak and cask chippings for 14 hours in its kilns in Grimsby and, for something a little different to turkey, its The Best Lamb Guard of Honour is ”expertly prepared by our teams and seasoned with a rich and fruity cranberry and sloe gin glaze”.

Here’s The Grocer’s pick of the range 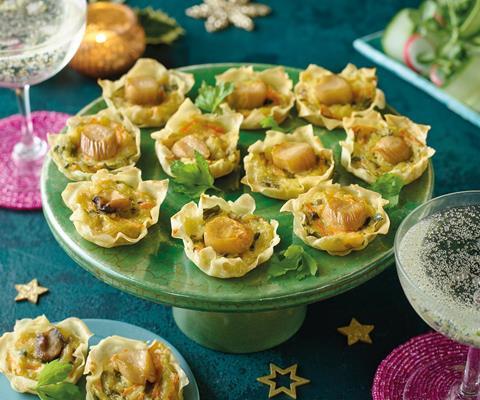 A vegan take on a French classic, with king oyster mushrooms encased in crisp filo pastry with a ”rich” coconut milk sauce. 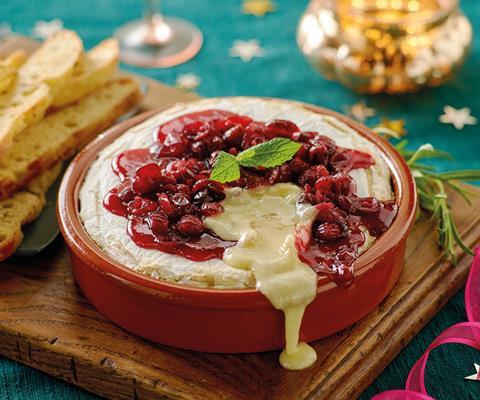 One for the cheese lovers. This vegetarian baking brie from Normandy comes with dried cranberries and a sour cherry and sloe gin glaze. Available from 17 November. 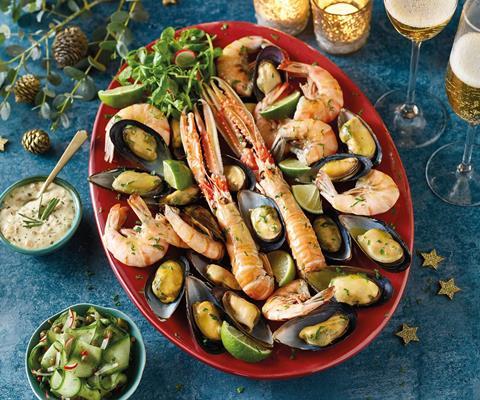 This feast of mussels, king prawns and langoustines serves four, according to Morrisons. The dish is finished with garlic and herb butter for richness and a mellow flavour. It will go on sale from 13 December. 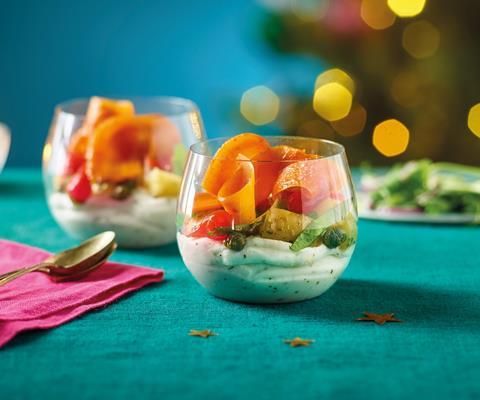 Another vegan twist on a classic. Two portions of BBQ smoked carrot flavoured with nori and marinated in a dressing of rapeseed oil, cider vinegar, mirin and smoked paprika for four days. Layered on a base of coconut based soft cheese, basil, marinated potatoes, leafy spinach, caper berries and sweet drip pepper pearls. It will roll out on 21 December. 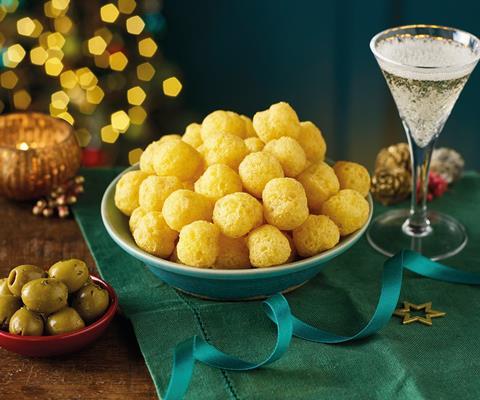 Light and crunchy turkey and stuffing flavoured maize and potato balls. The bite-sized balls are coated in a savoury meaty and herby flavouring. Available from 1 November. 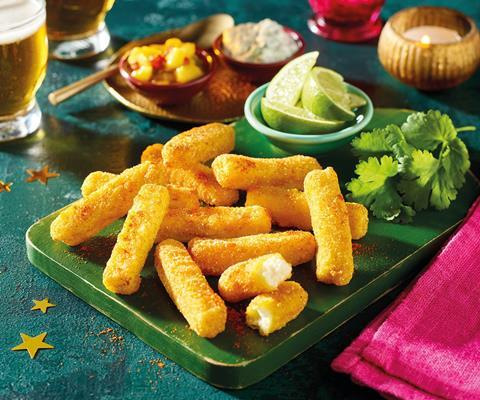 Move over halloumi fries. These crispy paneer sticks are dipped in an aromatic pakora spice coating. They go on sale from 4 October, in plenty of time for Christmas gatherings. 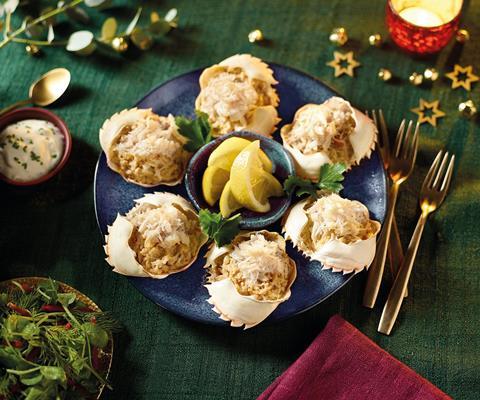 Made with crab pâté and crabmeat mixed with soft cheese and crème fraiche, served in six small shells. Available from 18 December. 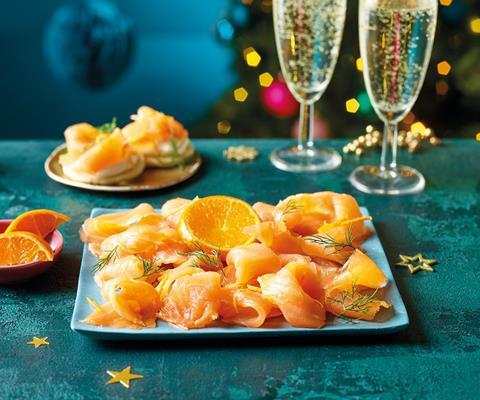 This Scottish salmon has been reared in the cold clear waters of the west coast, Hebrides and Orkney & Shetland. It has been smoked three times over oak wood and cask chippings in Morrisons’ own kilns in Grimsby to develop a rich flavour and buttery texture, then marinaded with orange juice and clementine oil and garnished with a dried orange slice for a festive twist, the retailer says. It will be available from 14 December. 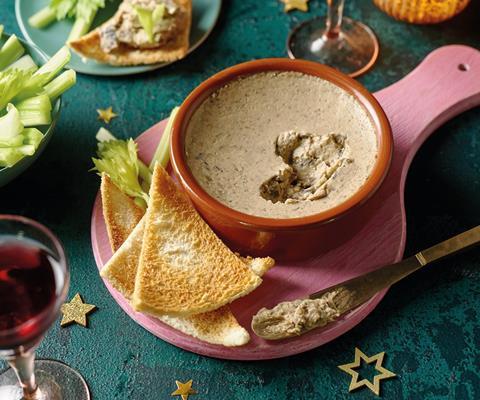 Morrisons describes this dish as an “indulgent” plant-based mushroom pâté made with oven-roasted mushrooms, a vegan alternative to soft cheese, vegan alternative cream and enhanced with garlic, parsley, thyme, porcini mushrooms and smoked paprika. Made to an exacting recipe by expert pâté manufacturers in small batches. It will be available from 21 December. 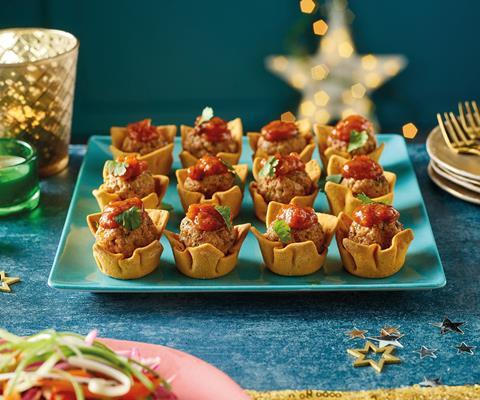 Made using British pork blended with smoky chipotle paste, roast garlic, smoked paprika and coriander. The spicy taco cups deliver a real chilli kick and crispy texture, claims Morrisons. “The succulent meaty pork meatballs are well seasoned with a meaty juicy texture and topped with a rich and smoky tomato salsa that compliments the meatballs perfectly,” it says. The party treats go on sale from 15 November. 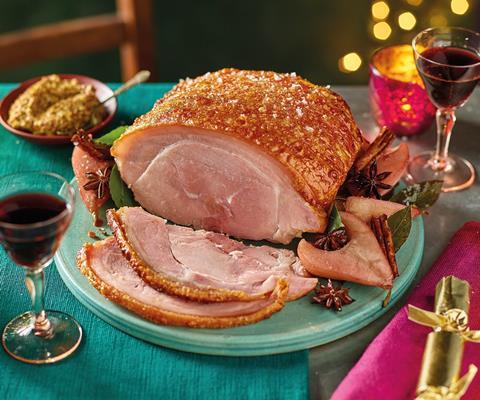 This hand-scored, sweetcure British gammon joint with succulent crispy crackling serves 10 to 14 people, says the retailer. It will be available from 29 November. 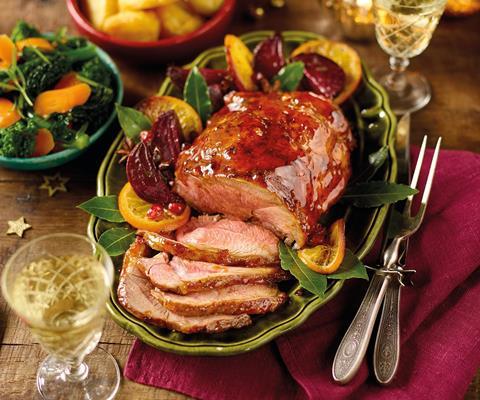 Tender British lamb leg, coated with a sticky bourbon, honey and orange glaze. It serves four and rolls out from 15 December. 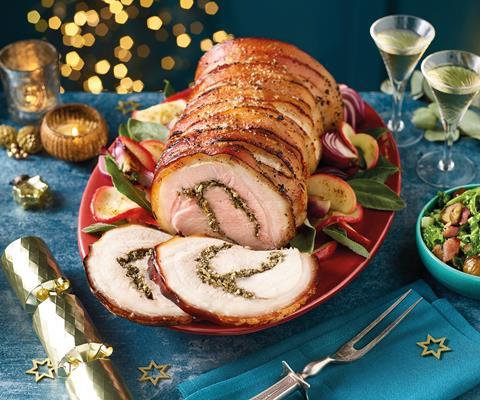 Morrisons’ The Best Porchetta Joint is a loin and belly of pork hand-rolled and stuffed with a traditional sage and onion rub. The porchetta has a hand-scored crackling, which, when cooked, gives the product even more flavour and the perfect crispy characteristic, says the retailer. It is served with a festive spiced bramley apple sauce to complement the traditional flavours of the pork and stuffing. It will go on sale from 15 December. 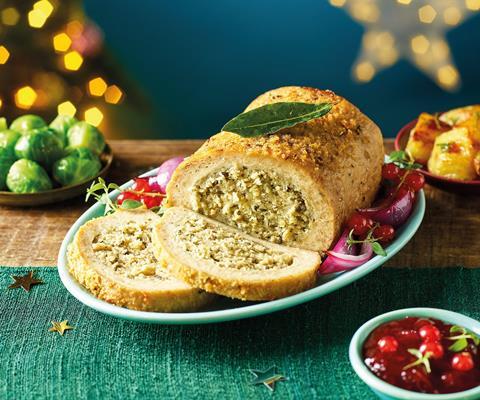 A “succulent” soya joint encases a centre of caramelised onion, parsley, sage and thyme stuffing. Topped with paprika gluten-free bread crumbs and a bay leaf, it serves two and goes on sale from 21 December. 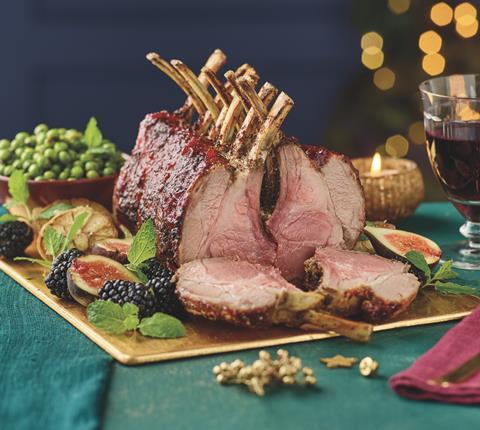 British lamb with a festive orange and juniper crumb and a sweet cranberry and sloe gin glaze. Morrisons has billed it as a festive showstopper for any Christmas occasion. It serves four and hits stores from 15 December. 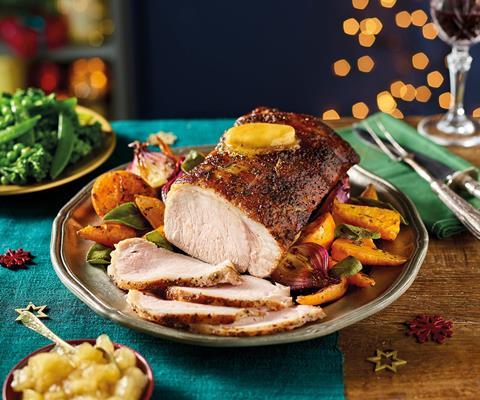 The Best Pork Loin joint is seasoned with a savoury salt and pepper rub that has been subtly spiced with festive flavours such as cinnamon, clove, ginger and nutmeg. Cooking instructions dictate that towards the end of the cooking time, the basting butters should be added to enhance the savoury flavours of the meat and add to the texture. It rolls out from 15 December. 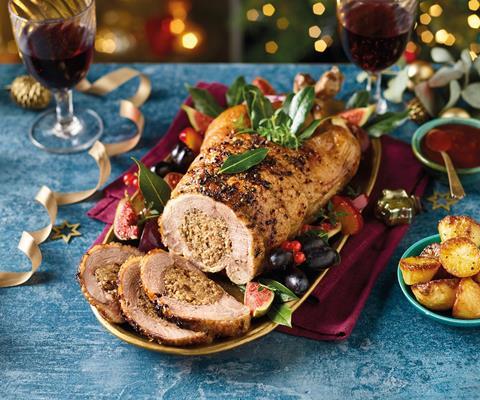 An easy to carve, ready to roast duck with pork and plum stuffing with a plum, caramelised onion and port glaze. It serves from four to six people. 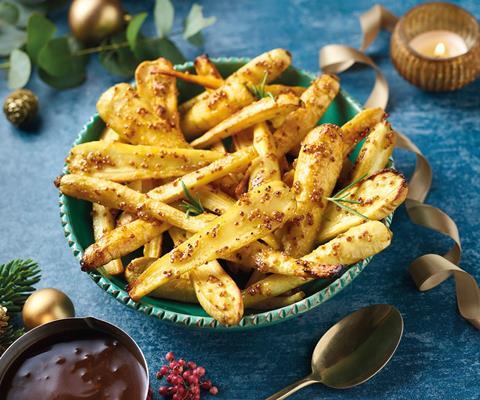 Sticky-sweet parsnips with a honey and mustard coating. The packs serve up to four people and roll out from 15 December. 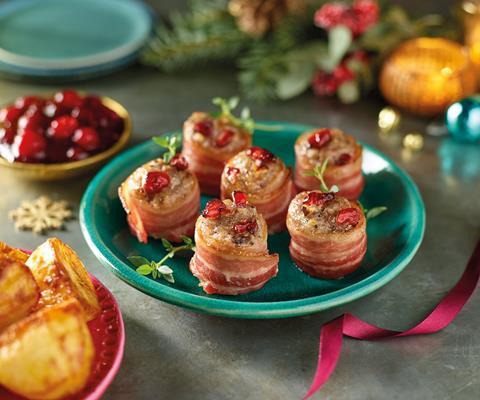 These packs of six pieces of gluten-free pork, apple and cranberry sausagemeat wrapped in smoked bacon go on sale from 29 November. 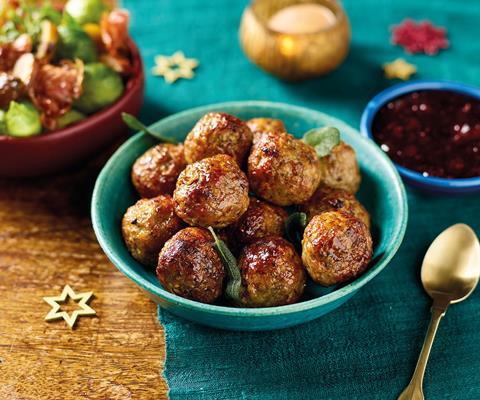 Morrisons says the pork, sage and onion stuffing balls have been “expertly seasoned” for well-balanced flavour, with a “delicious” melt-in-the-mouth texture. They come in packs of 12 and go on sale from 1 December. 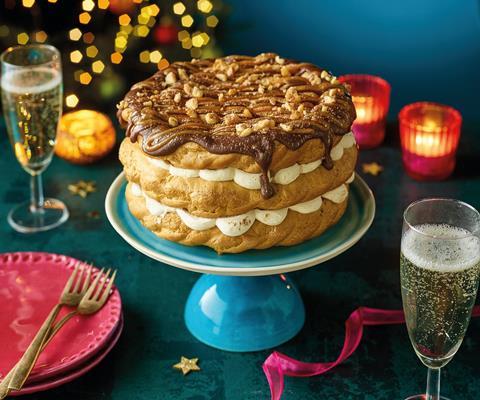 This luxurious dessert is comprised of three layers of crisp choux pastry, filled with a rich and buttery salted caramel sauce and lashings of whipped British salted caramel cream. This is generously topped with Belgian chocolate ganache and hand-piped salted caramel sauce, before being finished with crunchy honeycomb pieces and a light dusting of gold sparkle. It will be available from 4 October. 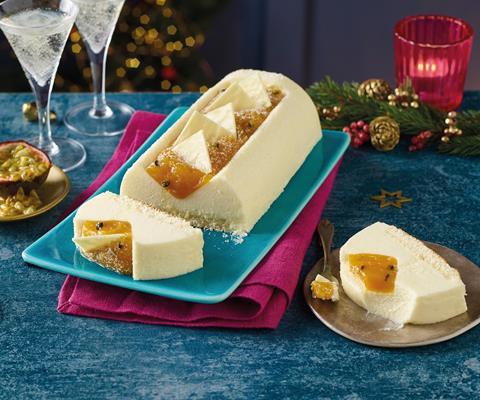 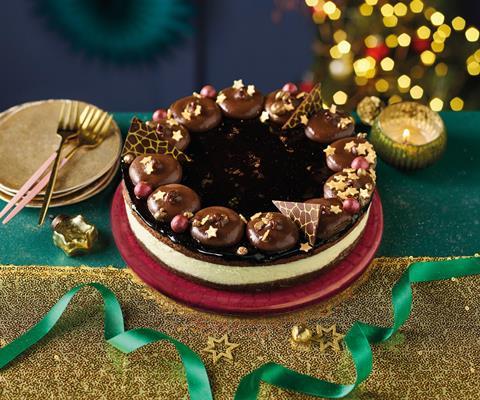 A rich Belgian chocolate sponge, big enough to serve 10 people. It is layered with caramel and finished with crunchy honeycomb pieces and a dark chocolate glaze. Available from 6 December. 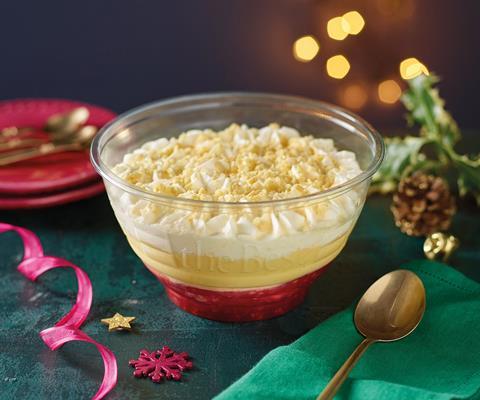