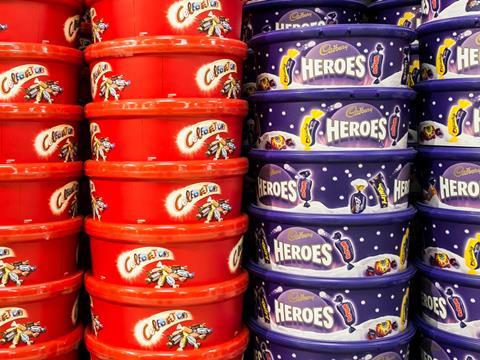 Supermarkets are slashing prices on some festive chocolate favourites compared with last year.

A 650g tub of Cadbury Heroes is 18p cheaper than last year. Morrisons has increased its price for the SKU by 28p to £5, but Tesco is currently selling it on promotion for £4, making it a pound cheaper than this time last year.

Tesco is also offering a save £1 deal on a 250g box of Celebrations, now £2. Asda has increased its price by 50p to £2.50, while Sainsbury’s and Morrisons have kept their prices the same at £3 and £2 respectively. It means the SKU is 13p cheaper than last year at £2.38 on average.

A 200g box of Lindt Lindor milk chocolate truffles is also up 5p on average. Asda has cut its price by 50p to £3.50, and Waitrose is currently selling it on promotion for £4 - down from £5 last year - but Morrisons has increased its price for the SKU by 74p.

Meanwhile, a 360g bar of Toblerone is also 51p pricier on average across the mults. Tesco, Sainsbury’s and Waitrose have increased their price by 55p to £4.50, while Morrisons has added £1, selling at £4 this year.

It follows a year of “volatility” for cocoa bean prices, which increased by 10.9% to £1,688 per tonne over the course of the fiscal 2017/18 year, according to global cocoa producer and grinder Barry Callebaut.

World sugar prices also fell by 13.8% in 2017/18, while European prices plummeted by 34.2% “driven by the elimination of production and export quotas”, Barry Callebaut said.

Dairy prices weakened at the beginning of the year due to “record high deliveries”, the company added, but began to rebound after the heatwave across Europe over the summer, ending the year “at similar levels to where they started”.