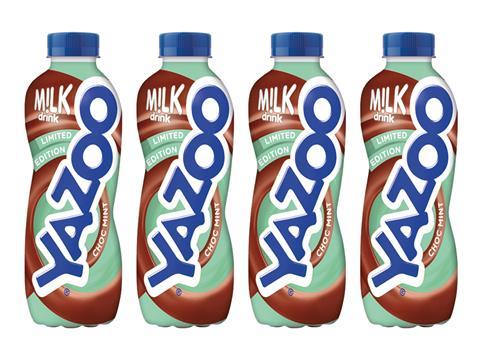 Why: Brits love flavoured milk. The rise of milkshake bars such as Shakeaway has helped grocery take-home sales shoot up 10.8% to £156.7m [Kantar Worldpanel 52 w/e 5 November 2017], representing a third of the larger dairy drinks market. To capitalise on the trend - and the demand for flavours more unusual than vanilla, chocolate and strawberry - Friesland Campina added Yazoo Choc Mint in April as an exclusive for the convenience channel. This limited-edition variant aimed at 16 to 24-year-olds is also available as a £1 PMP.

Consumer verdict: Almost half of our shoppers were attracted to this drink pre-trial due to the brand name and “eye-catching” design. Interest increased slightly upon tasting, with praise - mainly from young adults - for the “good, strong taste” and “great texture”. Yazoo’s milkshake was “not too sweet” and “good for kids’ lunchboxes”, said consumers. While most agreed the drink was “good value”, some criticised its “processed” nature. It was “a little bitter” and “too minty”, they said.