Higgidy goes into the red despite soaring sales of premium pies 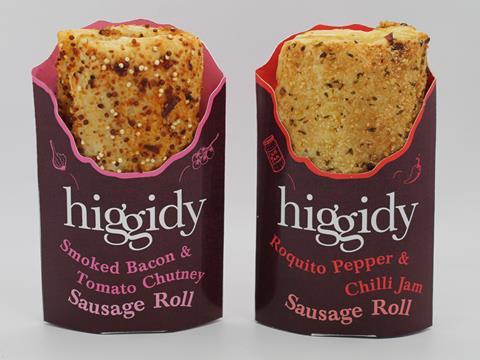 Higgidy has recorded another year of double-digit sales growth but its £2m investment to expand its West Sussex factory has pushed the premium pie maker into the red.

Revenues increased 24% to £22.6m in the year ended 30 September 2015, which the business attributed mainly to growth with its existing customer base of Tesco, Sainsbury’s Waitrose and Booths, as well as the continued development of meat and vegetarian sausage rolls.

Co-founder James Foottit said in the newly filed accounts that Higgidy, which has doubled sales from £11m since 2011, had “outperformed the market” and “cemented its place” as the nation’s fastest-growing premium savoury pastry brand.

Higgidy broke into The Grocer Fast 50 in 2015 at number 20 thanks to growth in the past two years. However, the ­business slipped to a pre-tax loss of £173k, compared with a profit of £296k in the previous year, as it chased its ambitious ­target of £50m in sales by 2020. Higgidy said the loss was largely the result of the 2013 purchase of two neighbouring units at its site in West Sussex, which would allow it to increase production space to 25,000 sq ft.

Foottit added in the business review of the accounts that sales were on track to hit £26m in the current 2015/16 financial year.

“This coming year we will remain focused on increasing our penetration and developing other channels both within our existing customer base and beyond,” he said. “We will continue to invest in product development with a focus on ranges that can work well for convenience.”

MD Mark Campbell added: “We’ve invested a huge amount into the business and it is great to see the impact this has had on sales. At Higgidy we are focused on innovation and growing the categorieswe operate in. The expansion of our kitchens onto the neighbouring site will give us the flexibility to take this approach to the next level. Ultimately we want Higgidy to become an enduring British brand known for exciting flavour combinations and homemade quality.”