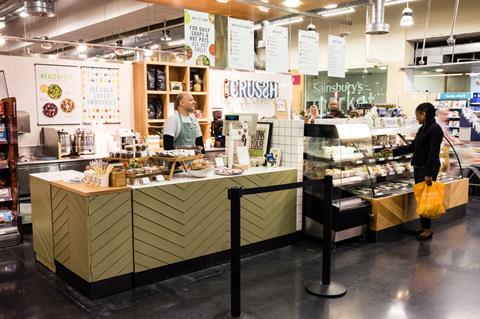 Products include vegan and protein-based dishes

Sainsbury’s is adding a range of salads and wraps from healthy living brand Crussh to stores this week.

The supermarket is adding the products, which include vegan and protein-based dishes, to 61 of its Local convenience branches from this week.

The rollout follows a trial of stocking the items from Crussh in 10 Sainsbury’s stores from July last year. It comes as part of Crussh’s ongoing strategy to strengthen its convenience and food-to-go offering, and expand into areas outside its own high street stores.

Crussh also continues to operate its concession site in Sainsbury’s Pimlico store, where it sells its full range of food lines, juices, smoothies and organic coffee. This has been operating since June 2017.

“We have worked with Sainsbury’s since 2017, and we are delighted to be strengthening our relationship by launching our range across convenience stores throughout London,” said Crussh CEO Shane Kavanagh. “We’re thrilled that our customers will now be able to buy our ‘fit food’ in 61 Sainsbury’s stores, giving us a great opportunity to introduce our food to new customers whilst hopefully adding something new to the Sainsbury’s food to go range.”

This follows the addition of several concession tie-ups Sainsbury’s has introduced over the past couple of years. These include two food-to-go counters - Grains & Greens and Mezze Box - at five stores, and in-store ice cream parlours with Ben & Jerry’s and Carte D’Or across five branches.