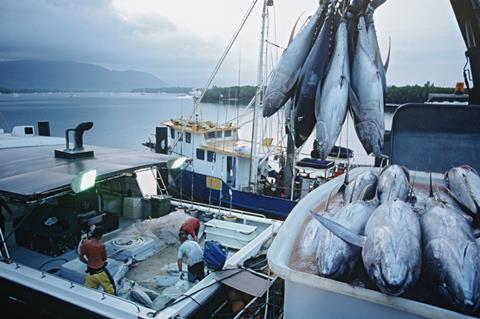 Thai Union is trialling an artificial intelligence-based monitoring system, which will be able to detect illegal fishing and human rights abuses aboard tuna vessels within the year.

The John West owner claimed the system would provide greater reassurance to retailers and shoppers their tuna was responsibly and ethically caught.

Tuna fisheries are under severe threat from illegal fishing, part of a widespread failure to tackle the issue that has left nearly 90% of global fish stocks under threat, according to the UN.

Forced labour and human trafficking are also believed to be severe problems aboard boats. However, with vessels often at sea for long periods, monitoring is extremely difficult.

The seafood sector is largely reliant on human observers, but it is a dangerous job, with inspectors often facing harassment and intimidation. The high risks contribute to many boats going unobserved.

Inspections have fallen further during the pandemic with many authorities suspending requirements for on-board observers due to social distancing concerns.

But the cameras are currently limited by a reliance on individuals reviewing the footage.

“Over a six-month trip if you have five cameras, it would take you a long time to analyse all of that data, and possibly not effectively,” added McBain.

The company is therefore honing its AI capabilities to detect illegal fishing and human rights abuses through a partnership with a US university.

It provides the potential for all vessels to be under comprehensive observation at all times. “The AI will take us to a level of sophistication we don’t have at the moment,” McBain said.

However, she doubted the AI could be rolled out extensively in the short term, due to need to commercialise the tech.

In the meantime, it is hoped the cameras could act as a deterrent. “When people are observed they act differently and more legally,” McBain claimed. “I think you’ll see a change in behaviour for the better once e-Observers become standard on vessels.”

Jess Rattle, head of communications at Blue Marine Foundation, agreed there is an “urgent need” for electronic monitoring on tuna vessels, but while Thai Union’s commitment was laudable, it must take a more active role in auditing the vessels in their supply chain.