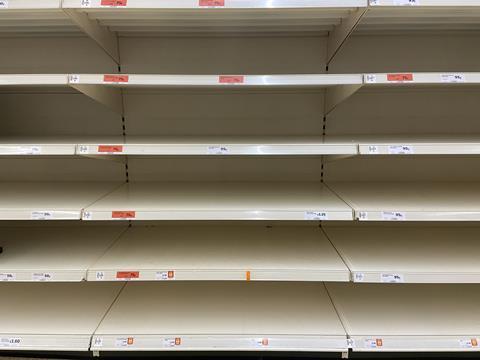 The main reason supermarket shelves are empty is that people are adding a few extra items to baskets and making more trips, rather than buying large amounts of the same item in one go, according to Kantar.

The research agency found that just a small minority of people were engaging in what might traditionally be thought of as stockpiling. For example, 6% of liquid soap buyers have taken home extraordinary quantities, and only 3% of dry pasta shoppers.

Instead, many consumers are adding a few extra products each time they visit a store. Kantar found the average spend per supermarket trip rose by 16% to £22.13 in the week ending 17 March compared with the same week in the previous month.

Kantar’s head of retail and consumer insight Fraser McKevitt said: “Most of us have seen images circulating online of people bulk buying products like toilet rolls and pasta, but our data gives us a different, if counterintuitive, diagnosis of what’s happening.

“Ultimately we need to look at the empirical evidence and it tells us that temporary shortages are being caused by people adding just a few extra items and shopping more often – behaviour that consumers wouldn’t necessarily think of as stockpiling.”

He pointed out that people will also be eating in more as a result of restaurant closures, social distancing and increased working from home. “Consumers spend more than £4bn each month on food and drink out of the home, a significant proportion of which will now be channelled through the supermarkets.”

Alongside supermarkets, health & beauty stores, bargain retailers and convenience stores all saw a rise in sales during the week ending 17 March, with trips increasing month on month by 25%, 29% and 19% respectively. Meanwhile, visits to pet stores went up by 27%.

Bruno Monteyne, a senior analyst at Bernstein, has predicted supermarkets will continue to benefit from coronavirus stockpiling, even as the country moves to lockdown.