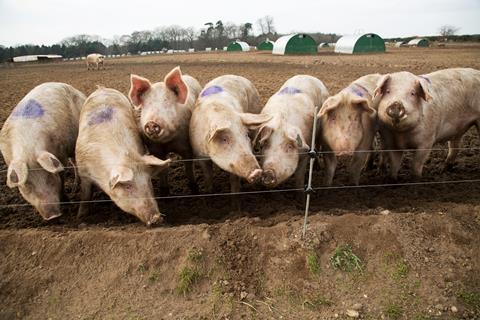 The UK has more than doubled its monthly exports to China since it first announced an outbreak of African swine fever (ASF) in August 2018, with volumes rising to 7.4 million kg in September [HMRC] and Chinese prices reaching £5.51/kg in October.

However, British farmers have claimed they are not receiving the benefits, with UK prices currently at £1.56/kg [AHDB SPP 16 November].

Processors were “profiteering” from the ASF crisis and “taking advantage” of “over-inflated costs into the UK market” by not passing on increased profits to farmers, claimed one farmer.

“They promised us a bonanza with ASF. We haven’t seen anything,” added Yorkshire farmer Ian Broumpton. “It suggests someone, somewhere is conning us.”

A third farmer added: “Prices may be starting to trickle through, but we’ve been left behind for six to nine months.”

ASF is now spreading across Europe, with fears the disease could soon reach the UK. But there is mounting concern producers are not financially stable enough to weather any potential crisis.

Fear the Fever: what can be done to tackle the African swine fever pandemic?

“Pig farmers need to be saving all they can to prepare,” said National Pig Association CEO Zoe Davies. “If [ASF hits the UK] and they aren’t in a secure financial position, the future of British pork supply could be in significant danger.”

UK farmgate prices hit a two-year low in March as suppliers stockpiled in anticipation of Brexit.

However, other drivers such as suppressed supermarket prices had also influenced farmgate prices, said Cranswick CEO Adam Couch. This outweighed the “relatively new” influence of “the China effect” and would take time to filter through, he said.

Although pork prices had not seen the growth farmers would like, prices remained stable due to long-term contracts “designed to protect farmers from a volatile marketplace,” said Andrew Saunders, agriculture director at Tulip.