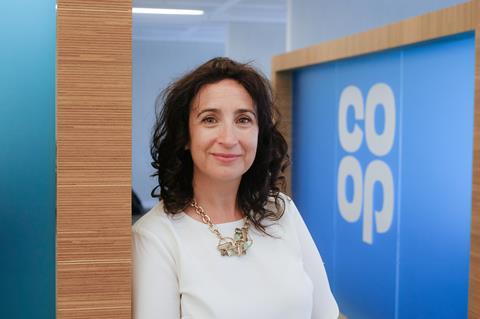 Co-op is calling on the government to act urgently to halt a potential store crime epidemic, as violence towards workers increases during the coronavirus crisis.

Its food boss Jo Whitfield challenged government “inertia” on the issue a year after the Home Office’s call for evidence on violence against shop staff closed, on 28 June 2019.

Shopworkers had been spat at and threatened with being ‘given coronavirus’ during lockdown, she said. The retailer has seen in-store crime rocket more than 140% this year.

Numbers of violent incidents hit record levels in June, with 1,350 attacks having been reported by the middle of the month.

Example of coronavirus-related attacks in Co-op shops across the country include Adeel Zafar, a store manager in Halesowen, reporting a customer going “ballistic” after being asked to respect social distancing measures. Claire Saunders, a store manager in Romford, was physically assaulted, as well as having a shoplifter threaten to spit in her face and give her coronavirus.

“Last year, more than 600 of my colleagues bravely took the time to share their own experiences of abuse, violence and intimidation with the Home Office as part of their call for evidence,” Whitfield said.

“Yet here we are, a year on since the consultation closed and there has still been no response. My colleagues need to have their contributions acknowledged to know the government takes retail crime seriously. This issue is not going away, it’s just getting worse thanks to the onset of coronavirus.”

In April, a survey by union Usdaw revealed abuse and violence towards shopworkers had doubled since the outbreak of coronavirus in the UK, while earlier this month a report conducted exclusively by Shepper for The Grocer showed a quarter of supermarket workers said they had experienced abuse since the pandemic began.

As part of its ‘Safer Colleagues, Safer Communities’ campaign, Co-op is building awareness and support for MP Alex Norris’ Assault on Shop Workers Bill, which has had its second reading in parliament postponed. It calls for greater protection for shopworkers in carrying out public duties.

Hundreds of Co-op colleagues from across the UK have filmed short videos detailing their experiences and will be sharing these on social media, asking for MPs to show their support.

“The role played by shopworkers in serving their communities, particularly doing the last 12 weeks, is nothing short of amazing and they have rightly been deemed as key workers who are playing an essential role in keeping the nation fed,” Whitfield added.

“Yet despite this recognition, they are continually disrespected and have to contend with unprecedented levels of violence and abuse on a daily basis. This is not a Co-op problem, it’s a societal one that all retailers are concerned about.”

She called on MPs to support their constituents in backing the Assault on Shop Workers Bill. “I will also be asking my peers at other retailers to do the same,” Whitfield said.

“Enough is enough – store workers need to know that the government is serious about tackling this issue and as an industry we must be united in protecting our workers.”

Alex Norris MP said a year was far too long to wait for the government to respond on such an important issue.

“Every day that they’re slow to act is a day when staff are left unprotected,” he said. “Quicker action could have made a difference for hundreds over the last few months.”

Co-op has committed a further £70m over the next three years to invest in technology to keep colleagues safer, including water fog cannons, remote monitored iCCTV, body cameras and communication headsets for all frontline colleagues.