Does a golden future lie ahead with a slashed trade deficit? Or will the UK struggle with production limitations and face an onslaught of imports?

In 2015 the UK dairy industry will reach a crossroads. The removal of milk quotas marks a major step in the EU’s efforts to break the link between production and subsidies, and enable EU member states to compete more effectively in the global marketplace. To some, this brave new world is full of opportunities for UK dairy to become a world-leading brand; to others, it threatens the stability of the sector, which will no longer have the security blanket of quotas to shield it from market forces.

The reality is likely to lie somewhere in between these two prognoses. Global demand for dairy is stronger than ever before, driven by emerging markets in North Africa, the Middle East and the Far East where a burgeoning middle class of consumers is adopting Western diets. Yet the number of countries targeting these growth markets is large, and those competing for a share of the prize face being exposed to the vagaries and volatility of the global market.

So what is the outlook for the UK dairy sector over the coming decade, and more, and what are the factors that will determine whether the removal of quotas is good or bad news for UK plc?

A best-case scenario, as set out in the UK dairy industry’s Leading the Way plan, is to eliminate the UK dairy trade deficit by 2025 by producing an extra four billion litres of milk through yield improvements and a growth in herd size of at least half a million. This sounds like an ambitious target, but as the NFU’s chief dairy adviser,Rob Newbery, explains, the dairy sector does not require a dramatic step change in output to achieve its goal. “We think it’s realistic. It doesn’t require rapid growth, only that we continue on our existing trajectory and maintain productivity gains,” he says.

Although the UK has historically fallen below its milk quota level, the potential to increase capacity at a farm level is there, according to Kite Consulting partner John Allen. “We’ve got the land that’s available from beef and sheep in the West Country, we’ve got the potential to run larger dairy units, plus we’ve got access to cheap European labour, which makes wage costs relatively competitive.”

Adams Foods, the UK’s largest supplier of pre-packed hard cheese, which is owned by the Irish Dairy Board, describes a best-case scenario where UK dairy exports grow strongly as the industry develops new routes to market and exploits growing demand for dairy in China, India, Russia, the Middle East and Africa. “Trade is vital,” says marketing director Alastair Jackson. “In the UK, cheese and butter volumes are in decline and when you look around the world demand for these products is on the rise.”

Suppliers are already targeting new investments towards these growth markets. Arla, for instance, has established a new innovation centre in Beijing to ensure it can launch products developed and manufactured specifically for Chinese consumers.

The reputation globally of the UK brand could prove a major advantage when competing to supply emerging markets, according to Rich Clothier, MD of Wyke Farms. “UK dairy is a fantastic brand, and Asian countries in particular will pay a slight premium, even for UK milk powder,” he says.

But reducing the UK’s balance of trade is not just about increasing exports. Import substitution will also have an important role to play in making the UK a net exporter of dairy products. “The current reality is that our domestic market is reliant on more than £2.2bn of dairy products sourced from Continental Europe and Ireland each year,” says Ronald Kers, chief executive of Müller UK & Ireland Group. “That is a lot of butter, yoghurt, cheese and other dairy products made with milk produced not in Shropshire, Ayrshire or the West Country, but in France or Ireland. The opportunity for Müller is to displace these imports by offering great quality products, which are made in state-of-the-art factories here, with milk produced on British dairy farms.”

However, the best-case scenario set out by the backers of the industry’s Leading the Way plan is fraught with uncertainties and places a particular onus on businesses and the government to create an environment where farmers and processors feel confident to invest for the long term. Defra says it is fully supportive of Leading the Way, adding that the UK dairy industry has a huge part to play in the government’s long-term economic plan to bring growth, jobs and security. “With a growing global demand for dairy, now is the time for British producers to grab this opportunity by promoting our high quality produce at home and throughout the world,” says environment secretary Elizabeth Truss.

Such supportive rhetoric is welcome, but industry stakeholders say the government needs to back up its words with actions that support the industry’s growth plan. “We need more progressive public health messaging, a labelling system that informs consumers, and the assurance that the rural economy will continue to be a focus for government,” says Mark Allen, CEO of Dairy Crest. Allen cites the issue of country-of-origin labelling as a particular priority for suppliers of UK cheeses. “Currently, some own-label Cheddar is produced from milk outside the UK, and under EU legislation can be cut and packaged in the UK and labelled as UK origin. This puts our British dairy supply chain at an immediate disadvantage to European competitors as well as misleading consumers.”

From a farming sector perspective, Newbery says a priority is for the government to maintain an effective TB eradication plan for the UK; to create a better capital allowance system that includes agricultural buildings; and to ensure ammonia emissions reduction targets are proportionate to growth in productivity.

As far as organic milk is concerned, the Organic Milk Suppliers Cooperative (OMSCo) says the government must ensure organic maintenance payments schemes in the UK are competitive with those paid to producers in Europe. “Current proposals will put UK organic farmers at a disadvantage to their European peers, and this could have a detrimental impact on the UK organic sector in the long term,” says Richard Hampton, OMSCo’s chief operating officer. 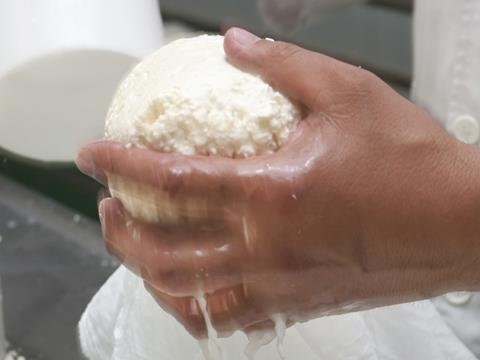 Growing global demand for dairy ingredients has seen a number of UK dairy processors invest heavily in whey, which has applications in products from bakery, beverages, dairy and ice cream to clinical, infant and sports nutrition.

Last year, in line with its aim of adding value to base ingredients, Dairy Crest announced an investment of £45m in its Davidstow creamery, which will enable it to produce demineralised whey powder for infant formula from early 2015/16. In July it announced a further £20m capital investment to manufacture galacto-oligosaccharide (GOS), a lactose-based prebiotic, in a joint venture with Fayrefield Foods. Fayrefield will provide access to necessary enzyme and other intellectual property, while Fonterra will market and sell both products for the fast-growing global infant formula market. Dairy Crest CEO Mark Allen says he sees both projects as a business priority offering further avenues to grow the business through added-value sales.

While some UK dairy companies are just getting into whey, others are already years down the line. Arla and First Milk have a joint venture at Westbury’s skimmed milk powder plant, which has the capacity to process 800 million litres of milk per annum. First Milk also has a joint venture with Fonterra, which focuses on premium whey protein products.

Whey is a scale business, according to Ash Amirahmadi, vice president of UK milk and member services for Arla Foods, which is why a lot of UK processors are entering joint ventures with other processors rather than going it alone.

For processors not yet in the whey business, the benefits of developing an additional revenue stream have to be balanced with the cost of investment and the potential returns. “The problem with whey is it’s the most basic commodity in dairy, so to make a significant gain you have to operate at a lower cost to competitors,” says an executive at one processor yet to take the plunge.

Retailers will also come under scrutiny for their supply chain practices. Allen at Kite Consulting believes they have done farmers a lot of good in recent years by developing longer-term relationships and agreeing contracts with built-in mechanisms to ensure certainty of price. However, one supplier worries a potential influx of cheaper product, for example Irish Cheddar, could see suppliers bullied into accepting lower margins once quotas are removed. “The danger is whether the retailers will be able to resist the temptation of cheap products from Germany and Ireland,” he says. “If they take a short-term view, we could be in for a very volatile three to four years.”

Price volatility is the single greatest threat from a move towards greater market liberalisation. A recent reduction in UK farmgate prices reflects a downward movement in global and European prices. As markets become increasingly integrated, demand for dairy on the other side of the world will directly impact the price paid by UK consumers at the checkout. “If Chinese consumers are willing to pay more for milk formula than UK consumers, then that is bound to have an effect on UK prices,” says Kevin Bellamy, senior dairy analyst at Rabobank.

Greater integration between markets also means more vulnerability to climactic shocks, he adds, while Clothier warns currency is another “big unknown” as a strong pound has the potential to make imports even cheaper.

A worst-case scenario for 2025 is that the UK’s dairy deficit worsens as it becomes an attractive market for other dairy exporting countries and fails to fully exploit its own target export markets. Germany, the Netherlands, Belgium, Denmark, Ireland and France all have the capability to expand production, says Bellamy, and while many of these countries are targeting emerging markets, the proximity of the UK and its mature dairy market make it an attractive target for value-added goods such as Continental cheeses and yoghurts as well as cheap commodity products.

Another unknown is whether processing capacity can keep pace with production. Jackson notes that although the industry has invested in new processing assets, much of this has been to replace or rationalise older facilities, and as such processing capacity is still not sufficient. His concern is that a “wall of milk” could hit the market, leading to a farmgate milk price crash and a consequent destabilisation and reduction in UK dairy farming.

The jury remains out on which of these scenarios is most likely to come to fruition. The most likely case, according to Adams Foods, is that the UK achieves a limited but sustained increase in milk production, while the balance of trade improves, but the UK’s deficit is not eliminated any time soon.

Newbery adds the long lead-in time to the removal of quotas has enabled producer nations to make preparations so that countries, including the UK, are already producing for the world market. In this regard, the EC arguably got the timing of market reform just right, he says.

The message is that the UK dairy industry has nothing to fear from the removal of quotas. But the extent to which it capitalises on this opportunity depends on all parts of the dairy supply chain creating a positive environment in which the sector can grow.