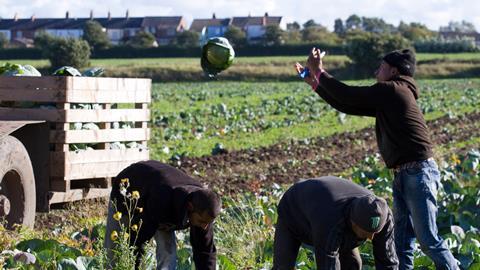 Comparing any national crisis to the Second World War is toe-curlingly cringeworthy at the best of times.

Not least because such comparisons frequently misremember and misrepresent the unique challenge faced by our ancestors.

We’ve heard plenty of misplaced references to the blitz, Dunkirk and bulldog spirits since the 2016 Brexit vote, for example. But perhaps one WWII comparison could actually help us in these troubled times – the idea of a ‘land army’.

Since the referendum, The Grocer has documented the reasons why British people have so often passed up on the opportunity to pick fruit & veg.

This reluctance by Brits to work on these farms (a position mirrored across many other parts of the food supply chain), has meant we’ve typically relied on migrant workers to fill seasonal picker roles every year.

According to the NFU, in 2019 Brits only made up 0.2% of the workforce, with almost all the rest coming from the EU.

Last year, it really hit home that this lack of interest from Brits in working on the land could cause our growers problems. The Grocer found thousands of tonnes of fresh produce had been left in the ground due to a lack of workers being available to pick it.

Even before coronavirus came to haunt us, 2020 was anticipated to be a difficult year for growers to source the workers they need as the UK formally left the EU.

It was why it was so heartening two weeks ago to learn thousands of Brits had applied for seasonal roles as their own industries came to a halt in the wake of coronavirus. In fact, according to Hops Labour Solutions – an ethical labour provider that has teamed up with its competitors Concordia and Fruitful to cope with the boost in domestic applicants – 26,000 at the latest count.

Meanwhile, other companies in Scotland and Northern Ireland have reported a big increase in interest, with soft fruit grower Angus receiving around 3,500 applications and potato grower-cum-processor Mash Direct 2,000.

But while there’s been a huge leap in interest from domestic workers, worries still remain.

A senior industry source told The Grocer that despite encouraging signs from domestic labourers, “many more applicants” were needed – particularly from the end of this month onwards as the soft fruit season kicks off – due to fears over the dropout rate from domestic workers.

This concern was thrown into stark relief by operations director at Hops, Sarah Boparan, who has previously attempted to get Brits into fruit & veg roles.

“We did a campaign a few years ago to work with Job Centre Plus to get unemployed workers into farming opportunities,” Boparan told The Grocer a few weeks ago.

“Of the 100 people we took through a training programme and supported in every way possible, only five stayed longer than two weeks.”

Likewise, there is also an issue with getting these applicants to the farms.

“The British response has been amazing but it’s whether or not farms are in the right place for them,” Concordia CEO Stephanie Maurel told The Grocer. “Some workers don’t have farms on their doorstep or transport [to get to them].”

So while we should all celebrate the fact that so many Brits have applied for seasonal work, we might perhaps be less confident about the number that will actually end up turning up to farms on a regular basis.

And with the UK estimated to need 70,000-80,000 seasonal workers a year, we’re still some way off being able to harvest many of the country’s crops.

So perhaps it is appropriate, here, to evoke the spirit of World War II. Because if we’ve ever needed another ’land army’ to pick British produce, it’s now.