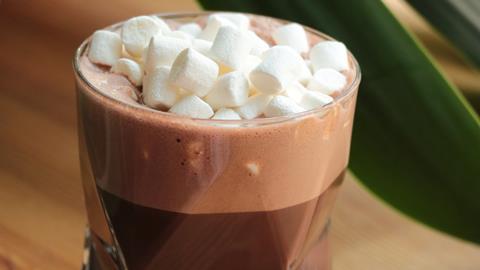 Actually, that’s a bonkers number of calories. No wonder Action on Sugar is alarmed that “many festive hot beverages contain huge amounts of sugar”. It comes after the campaign group analysed the largest hot chocolates and seasonal lattes available from popular food and drink chains. It looked at 124 hot chocolate drinks and 79 seasonal lattes – made with milk and milk alternatives – across Caffè Nero, Starbucks, Costa, KFC, Greggs, McDonald’s, Eat, Leon and Pret a Manger.

“Many high street coffee chains are failing to reduce the sugar in their festive milk and milk alternative hot drinks, despite the government’s sugar reduction programme – with some hot drinks increasing in sugar since 2016” Action on Sugar warned today.

Starbucks is the worst offender, it seems. That Signature Caramel Hot Chocolate contains a tooth-melting 93.7g of sugar – more than three times the daily intake recommended by the NHS. And a venti cup of its Gingerbread Latte with oat milk has 56.6g of sugar and 523kcals – “the equivalent of eating 17 custard cream biscuits” according to Action on Sugar.

That’s a sickly prospect. But it ought to be taken with a pinch of salt. First, the survey is inequitable in that it judges drinks by largest cup size rather than per 100ml. That means a Starbucks venti is up against a Caffè Nero grande, an Eat regular and a Costa massimo – none of them guaranteed to be directly comparable sizes.

Second, Action on Sugar doesn’t acknowledge that smaller (less calorific) sizes are available. Nor does it take into account that seasonal drinks are exactly that – they’re not year-round everyday options; they’re an occasional treat. And who doesn’t overdo it a bit at Christmas? (Not that it’s advisable to chain-eat 17 custard creams.)

What is alarming about Action on Sugar’s report, however, is chains’ apparent indifference to tackling the obesity crisis and Public Health England’s sugar reduction targets. Some even appear to have gone as far as to thumb their nose at such measures.

“Astonishingly, despite being blasted for their high sugar content in Action on Sugar’s hot beverage survey in 2016, more than one in four (27%) directly comparable products had seen no decrease in sugar but have in fact increased,” the new report reveals.

It’s no surprise, then, that Action on Sugar has called “for the next government to extend its Soft Drinks Industry Levy to sugary milk and milk alternative-based drinks”.

Surely, though, suppliers would rather control their own destinies than have the government take command. Action on Sugar’s report shows reformulation is possible, with some food and drink outlets “making noticeable progress as part of the voluntary measures”. Costa, for example, “has decreased sugar in some products by over 50% since 2016”.

But unless similar businesses follow suit, they – and, indeed, the wider hot drinks category – could face a frosty reception in the next parliament.