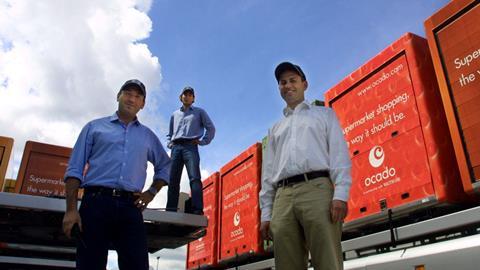 Ocado vs TDP: the claims explained

In a press conference on 9 July this year, Ocado CEO Tim Steiner faced a question on Waitrose and its new online partner.

“My only comment on Waitrose is I wish them luck,” he said. If anything it was surprising he should comment on a competitor at all.

What journalists didn’t know was that less than a week earlier, Ocado had obtained two search orders against Today Development Partners – the company helping Waitrose – and its founder and CEO Jonathan Faiman.

Explosive court documents revealed in the High Court of Justice Business and Property Courts now allege that the search orders led to the recovery, while Faiman was on his way to a meeting with Waitrose, of ‘highly confidential’ Ocado documents he had ‘no legitimate means of acquiring’.

The court documents go on to make a number of further allegations claiming that Faiman – a co-founder of Ocado, who went to the same school as Steiner, but left in 2010 - was using this information to set up a rival firm.

In response, Faiman has issued a counter-claim for hundreds of millions of pounds, alleging that it lost the Waitrose contract as a result of wrongful actions by Ocado. So what exactly do the court documents allege? Here is what each party in the case claims.

The two claimants, Ocado Group plc and Ocado Central Services Ltd, allege that since at least June 2018, Faiman and Jonathan Hillary, at the time Ocado’s logistics development and engineering director, have been ‘engaged in an unlawful course of conduct aimed at enabling them to profit at the claimants’ expense’.

Hillary and ‘potentially others unknown’ supplied Faiman, a co-founder of Ocado who left as COO in 2010, having been Hillary’s line manager, with ‘confidential financial and operational data about the Ocado business’ it is alleged.

Faiman and TDP are alleged to have ‘made use of that data in their own business models’.

Subsequent meetings with M&S took place between July and October 2018, during which Faiman is said to have proposed ‘an online food ordering and delivery platform which was to be an improved version of the Ocado platform’. On at least one occasion, Faiman is alleged to have requested that the meeting take place in a room without windows.

He is alleged to have indicated that TDP had up-to-date confidential information about Ocado’s business, and showed a spreadsheet including Ocado’s costs for acquiring new customers, as well as customer orders per year, van drops per delivery run, units per hour, and hourly labour costs.

Of particular concern to Ocado appears to be a spreadsheet model for an ‘immediacy proposition’ that was ‘very similar’ to the Ocado Zoom service announced in February this year, which at the time was confidential.

At a meeting with M&S in September 2018, Faiman is alleged to have asked everyone except M&S strategy director Melanie Smith to leave the room before offering to show her ‘current financial and management information relating to the Ocado business’, which she declined.

The industrial espionage is not alleged to have ended there.

In April 2019, after those talks had ended and M&S announced its new joint venture with Ocado, Hillary allegedly gave Faiman a ‘backpack full of confidential documents relating to the Ocado business’.

It was not until 3 and 4 July 2019 that Ocado obtained the two search orders against the defendants. Faiman was found ‘in possession of highly sensitive documents’ belonging to Ocado while on his way to a meeting with Waitrose, with whom TDP had recently announced a partnership with the stated intention of building Waitrose.com into a £1bn business in three years.

The documents included a draft copy of the Ocado/M&S contract, which was ‘highly confidential’.

The driver is also alleged to have given a laptop and documents ‘within the scope of the search order’ to a receptionist at the hotel at which Faiman was staying.

Hillary is alleged to have been in possession of documents that ‘should have been returned to Ocado when he had given his notice of resignation around six weeks earlier’.

Hillary is also alleged to have reset his mobile phone to wipe the contents before returning it to Ocado on leaving.

Following the searches, a lawyer acting for TDP is alleged to have deleted an ‘entire communications platform that had been used by a small number of individuals’ including Faiman and Hillary.

Ocado is seeking ‘damages and/or equitable compensation accordingly’ along with ‘an account of profits earned by the defendants as a result of their breaches of confidence’.

Jonathan Faiman alleges the search orders were wrongly obtained on the basis they were needed to ‘avoid very serious harm to their business’, even though Ocado could ‘not at the time of the search orders identify any harm’.

He claims the information upon which the search orders were granted was ‘unlawfully obtained from Marks & Spencer’, since the negotiations of the previous year were subject to non-disclosure agreements.

He claims it was as a result of these ‘wrongful actions’ that Waitrose terminated its agreement with TDP in July. Faiman and TDP are countersuing Ocado for ‘hundreds of millions’ in damages.

In its reply, Ocado claims that any loss is not a consequence of an NDA breach but of TDP’s ’wrongdoing’.

Of the M&S meetings, Faiman and TDP say pseudonyms were provided by M&S. Ocado’s reply says it was at Faiman’s request.

Faiman and TDP claim ‘the ground floor of M&S’s Paddington offices is largely glass, and Mr Faiman may have requested a meeting on one of the other floors… pursuant to his general concern to keep the discussions confidential’.

The defence also alleges that, because M&S was simultaneously in talks with Ocado, and market rumours suggested Ocado CEO Tim Steiner had previously monitored Waitrose’s calls, Faiman advised Rowe to ‘be cautious in his communications’. In its reply Ocado denies any such rumour existed and calls it an attempt by Faiman ‘to cast Mr Steiner in as poor a light as possible’.

The defence claims that Rowe said he and M&S chairman Archie Norman should acquire ’burner phones’, understood to mean ‘pay-as-you-go’ phones without a named account. (M&S refutes this allegation and has stated that neither Rowe nor Norman purchased or used any type of phone as is alleged in relation to the matter.)

TDP and Faiman admit that in around April 2019 Hillary provided a folder of documents, including the M&S contract, in response to a request by Faiman for ‘general assistance and/or advice in relation to how a third party supplier agreement with Waitrose might be structured’.

It’s denied the information was of ‘any commercial value’.

The communications platform was deleted because it was ‘much less effective than had been hoped, and the system was very rarely used’.

TDP and Faiman claim Ocado has been unable to show any significant loss or damage arising from the complaint nor how the defendants made any profit from it.

It’s claimed TDP’s technology would not have been a version of Ocado’s, which Faiman ‘considers suffers from a number of serious deficiencies’ – something Ocado in its reply says he has not demonstrated.

TDP and Faiman also dispute the confidentiality of material, and claim Ocado has not properly identified what exactly is confidential and why. It’s claimed information about customer behaviour such as average items per basket, average basket value and number of customer orders per week is published in annual report and accounts. Ocado says in its response that not all the information contained in the documents is publicly available.

Jonathan Hillary admits breaching his contract of employment and duties of confidence owed to Ocado by disclosing its confidential documents to Faiman.

But he claims the actions have caused Ocado no loss and he has made no profit. He agreed in May 2019 to work as TDP’s COO as soon as he was ‘lawfully able to do so’ but has not to date taken up the role and was dismissed by Ocado on 1 August.

He said ‘nothing of significance’ in the M&S meeting in July last year, did not consider himself to be representing Faiman or TDP, and did not know why pseudonyms were used.

He reset his phone before returning it to Ocado to ‘clear personal data’.