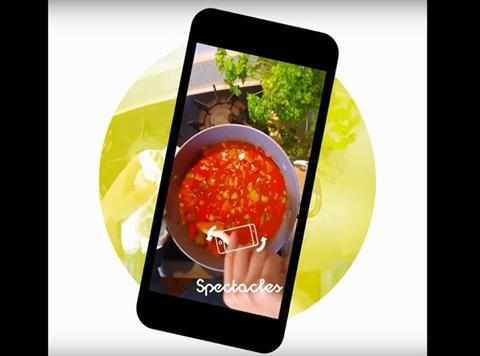 Remember the days when Snapchat was dismissed as an app for illicit affairs? Back in 2011, no one could imagine a use for the startup other than sending pictures you probably shouldn’t. Six years later, brands are queuing up to get a slice of the Snapchat audience (now broadened beyond adulterers to an estimated total of 13.6 million UK users by the end of the year).

Costa, KFC and Burger King are among the many high street food and drink retailers to have clambered on board. Now Sainsbury’s has become the first supermarket to create an ad entirely through Snapchat Spectacles (glasses with built-in cameras that stream short videos directly to the app). The 10-second ad, which forms part of its long-running food dancing campaign, was pushed out to 10 million UK Snapchatters yesterday.

Like the entire food dancing campaign, the move does smack of a contrived attempt to get down with the kids. And in all likelihood, that is exactly what it is. Snapchat is growing in popularity across all ages, but especially among the younger generation. According to media agency Carat, half of 15 to 24-year-olds use the app more than once a day (overtaking Instagram, which is used by 45% once a day). This younger age group is four times more likely to go on Snapchat than the rest of the nation, partially because they see it as “still relatively free from older generations, parents, relatives and employers”. As Carat’s strategic innovations director Matthew Knight says, this makes Snapchat an important channel for brands looking to achieve “meaningful reach and relevance” with younger consumers.

The fact Snapchat has not yet become littered with ads and commercial initiatives – as per Facebook and Twitter – gives Sainsbury’s every chance of grabbing attention. Of course, there is a potential risk of alienating ad-dodging users if the message becomes overly commercial, or jars with the Snapchat format. But by using Snapchat Spectacles, Sainsbury’s has managed to create something authentic-looking. As performance marketing agency iProspect says, the glasses are “an object of interest for many people who frequently create and share Snaps”, so that should generate some appeal. Plus, the short format means it doesn’t feel like too much of an intrusion (unless you count the unwelcome slurping noises).

So yes, it is contrived. The apparently spontaneous format is likely to be the result of months of deep analysis by marketing bods. But for teenagers who haven’t yet had their fill of Snapchat ads, it might just work.