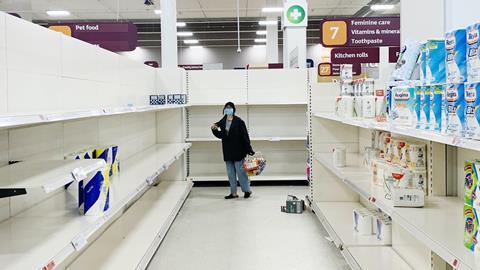 Supermarkets need support from government, not blame and more regulation

If the government wanted to spark another outbreak of panic buying in the UK’s supermarkets, it is doing a pretty good job of it.

As word leaks out from the watering can that is Westminster that Boris Johnson and his ministers are planning to get tough on supermarkets with new restrictions on numbers and a crackdown on mask wearing, so demand for online slots and average basket sizes will grow.

You don’t have to be Professor Chris Whitty to work out that if people think opportunities to visit shops are going to be slashed – or that the experience is to become a marathon of endurance – they’ll turn to stockpiling.

It happened in the first lockdown and without some clarity and reassurance, it will surely happen again.

So, with rumours circulating today that a tougher lockdown could see people limited to one trip outside the house a week – and even that chatting in the aisles could be banned – politicians better get the message straight quick.

While ministers are understandably worried about the pressure on the NHS, it’s disingenous to try to pass the buck on to retailers, who have kept food supplies going since the crisis began.

Supermarkets have already spent millions on measures to protect the public and staff. There are Perspex barriers, marshals on the door and sanitisation.

Those measures were ramped up before Christmas and we an expect them to be voluntarily tightened again in the next few days as scrutiny on retailers grows.

The bottom line is that if supermarkets are busier than they were last March, it is because ministers – in England at least – relaxed social distancing rules from two metres to one metre-plus in September, in response to fears over economic damage and the online capacity crisis.

Meanwhile, the staff that man and supply these stores have worked since the beginning of the crisis to keep the nation supplied with food, even though, as soaring absence rates in the industry show, they face the risk of infection and increasingly have to self-isolate.

And yet, rather than being praised for this effort, they are now being blamed for a failure by customers to follow lockdown rules.

Last week, ministers in Wales began talks of new restrictions in supermarkets, including a crackdown on numbers allowed in stores. Today, the UK’s minister for Covid vaccine deployment, Nadhim Zahawi, joined in, singling out supermarkets as a key area of concern and urging them to bring back one-way systems and social distancing markers (even though the UK government insists on no such regulation).

“We are concerned that, for example, in supermarkets we need to make sure people actually wear masks and follow the one-way system, and when they are at capacity to operate safely, people wait outside,” Zahawi told Sky News.

But if it is people waiting outside ministers want, what they will get is yet more pressure on online services which, as the first lockdown demonstrated, are unable to cope with feeding millions of vulnerable people on top of a huge spike in demand from everyday customers.

Instead of paving the way towards queues (real and virtual alike) and food shortages, Zahawi would be better off taking up supermarket offers of logistical help for distribution of the vaccine. He should also listen to those, including union bosses and food leaders, who argue that key food workers should be towards the head of that queue.